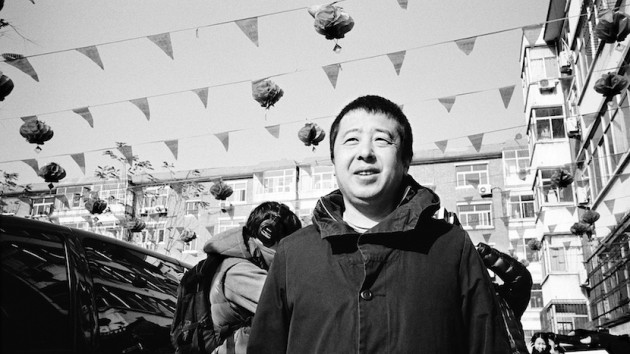 This is not a buddy movie: director Walter Salles follows his fellow filmmaker Jia Zhangke on a journey through a China in transition, revisiting many of Zhangke’s film locations, but always keeping a certain distance, however friendly. This is only logical: their respective filmmaking styles are to different for it to be any other way – Salles’ lyricism, his traditional approach, contrasts heavily with Jia’s abrasive humanitarian agitation, often filmed in short-hand.

When the couple starts their journey in Fenyang, the tone of the film is set. Jia bemoans the loss of the many karaoke bars which played such a central role in his debut feature Pickpocket (1997). But the bars have not been replaced, there are just a long line of boarded up shop windows. Before Jia visits his family in their new accommodation, he searches out his old quarters, and the many places where he grew up, which are now awaiting demolition. We learn from his mother that young Jia was fed “by hundred families”, the boy often left his home and ate at the dinner in his neighbours’ houses. His mother’s new flat has certainly many mod-coms – but the solidarity of the families, sharing their dark yards, is gone forever. Many of the locations from his films are also gone, or totally reduced like a wonderful old-fashioned theatre, from which only the stage remains – which Jia used in Platform (2000), a film about the fortunes of an amateur theatre group. It was here, that he first met his wife and muse, the actress Zhao Tao, who started her career as a ballet dancer. The newly built dam, which featured in Still Life (2006), which won the Golden Lion in Venice, is re-visited with all the villages and towns condemned to a life under-water.

Jia’s dissatisfaction with the “new’ China is obvious, particularly since his second-to-last film A Touch of Sin, has never been shown in China, even though the authorities claim that it has not been banned. Certainly, his new film Mountains May Depart (our Cannes Review for LFF), will not endear Jia more to the censors, since it neatly fits in with this documentary: a country in economic recession, and a puritanical government, always ready use the law. DOP Inti Brione looks at Fenyang with long, doleful takes, resting on the decay and finding alienation all over the place. Jia Zhangke, A Guy from Fenyang, is a sad journey through a country which has lost its identity and any form of cohesion. Brutal neo-capitalism meets abhorrent poverty and the government pretends that all this not happening, hiding behind a Stalinist past and its cult of personality – not that anybody should have any pity for Mao, now reduced and used: a puppet on a string who was only taken out when the government needed to celebrate an anniversary of some kind. There is not much to celebrate in the present. AS