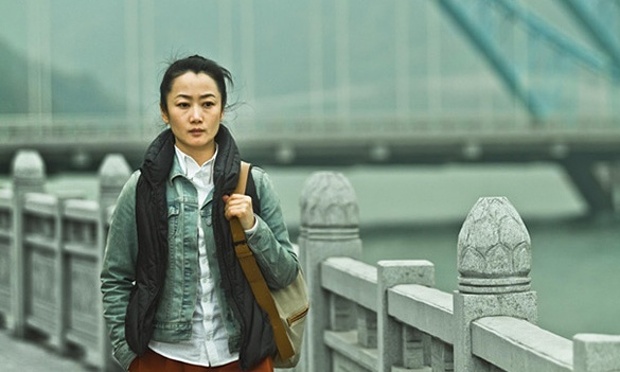 “Time will transform mountains and rivers, but our hearts will remain the same “

Jia Zhang-ke’s MOUNTAINS MAY DEPART is an beguiling and ambitious piece of filmmaking from a Chinese director whose previous dramas A Touch of Sin and Still Life have inventively captured the changing face of modern China.

Opening as a feisty arthouse love story in the director’s hometown of Fenyang, in the mining province of Shanxi, south of Beijing, the film gradually morphs into a creatively expansive essay film on the future of a wealthy Chinese family and the challenges it faces in adapting to life in a globalised society of Australia. The narrative unfolds in three parts that take place in 1999, 2014 and finally 2025.

The central character Tao is celebrating the dawn of a new century to the rhythms of an old one, in the ancient streets of Fenyang. China has embraced Western capitalism and fast-forwarded itself into a rapid expansion which will see its economy eventually crash and burn within two decades. The new Gods are technological rather than spiritual: cars, machines and mobile phones: and the alienating power of communicating without interacting is strengthening its soul-destroying grip on society.

The director’s wife and longtime collaborator Zhao Tao (Still Life) plays Tao, a simple carefree country girl, in love with Liang (Liang Jingdong) a coal-miner, but is soon tempted into arms of nouveau rich entrepreneur Jingsheng (Zhang Yi), who takes over the mine where Liang is working and steals his girlfriend in the process. In true ‘Posh and Becks’ style, they name their firstborn “Dollar” in celebration of their wealth in this upwardly mobile lifestyle (Yuan Renminbi would have turned out to be a better name, in hindsight). Eventually the threesome cross paths again in the second act in 2014 where Tao is visibly transformed into a sad and introspective woman who realises the error in her ways, and is reduced to a state of deep depression following her father’s death. Dollar eventually comes full circle into the present day state of economic meltdown as his life spins sadly out of control, alienated from family and country, and working as a Deliveroo-style courier.

Nelson Lik-wai Yu’s visuals illuminate and enliven this powerfully intelligent and prescient indie which, despite an ill-judged English language third act, and a slightly clunky opening, resonates with a superb central performance from Zhao Tao.   MT