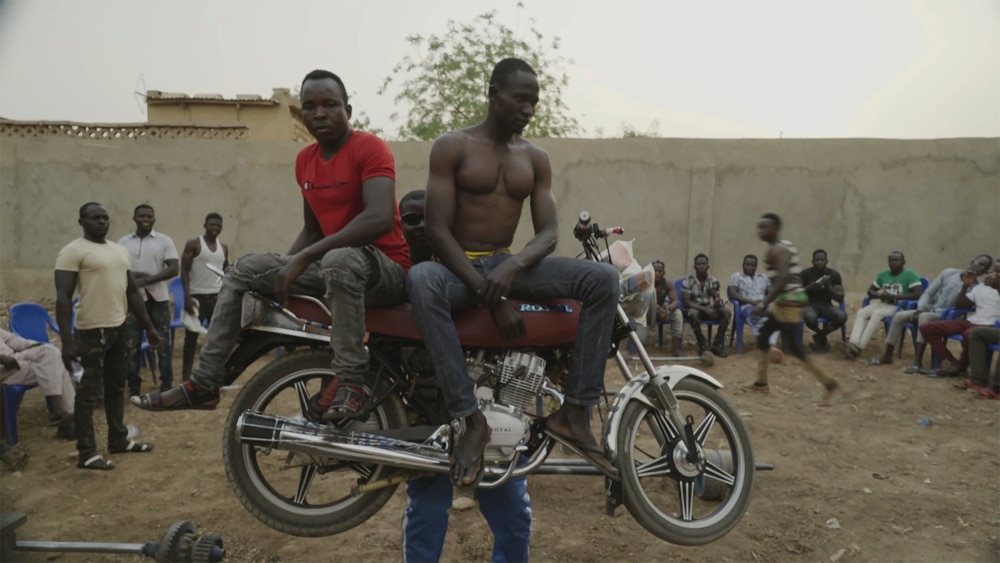 Nigerian writer/director Aicha Macky grew up the former leper’s quarter of Zinder, Niger’s second biggest city on the border with Nigeria. It’s a Godforsaken land-locked place where corruption is rife and education and opportunities are few, especially in the backwater of Kara-Kara where Islam holds sway but is hardly a civilising influence, the young men get by resorting to a gang culture and violence.

So it’s left to the women, and one brave soul in particular, to find out what’s gone wrong. Macky talked to those left behind by society, who only know violence as a means to change their lives. Her film is another shocking testament to depravity and disillusionment.

Two men on a motorcycle: on a mast a flag with a drawing of Adolf Hitler emblazoned with Swastikas. These two are joining their friends for a body-building session, explaining that “Hitler is the name of a guy from the USA”. The group might not know their history, but they are proud “because nobody is crossing the gangs of Kara-Kara”. The main enemy are the police: “I pray for Boko Harem, to come and f…k the cops”. Progress in there world sees knuckledusters replacing belts as their main weapons. Gangster movies influence their behaviour and they are proud of their scars.

Some have chosen a profession, like Idrissa Sani Malam, who ‘drives’ a sort of rickshaw taxi and is particularly proud of a scar left by a woman, “we were lovers, or I was at least a regular client.” Sex traffickers are part of the territory, their victims are girls as young as 15. Even women in the “Red Light district” are not protected, least of all by the police: They have not found the perpetrator who had slashed a woman’s throat three month ago. One way or the other, most of them end up in prison, a notoriously sordid place, where the men queue to use squalid latrines.

Meanwhile, Salissou Cikara visits a friend waiting for his trial and blaming ‘snitches’ for his fate. Cikara then goes home to his pregnant girlfriend, whose ultrasound costs the earth: 3000 Francs for the ultrasound, 9500 Francs for a blood test, and that’s not the end of the story. The civilised world has brought medicine, but at a price.

Bawo “has done a lot of bad things”. Like kidnapping girls in short skirts and abducting them into make-shift rooms “where we emptied ourselves into them. If they screamed, we put our hands over their mouths. We were breaking them in, with knives. Over time, they got used to it and became one of us. Reggae music plays all night as we smoke weed and take Tramadol.”

There’s always someone to blame for societal breakdown. This time it’s the ‘foreigners’  for stealing the country’s minerals. Ramatou Ma Main – Ramsess for short – is a hermaphrodite who gets by smuggling gasoline in daring night raids, hunted down by federal custom agents. Rumour has it that the gasoline smuggled into Niger actually belongs to the state of Niger. And votes on election days are rather cheap, 2000 Francs does not go far. Then Cikara has a brain wave: they will give up crime and form a security organisation – but this costs money. So the gang goes and works hard in the nearby quarry, but worse is to come, and Cikara dreams on. DoP Julien Bossé takes us to the centre of the action, his incredible footage particularly of Ramsess’ last raid and confrontation with the custom officers feel like a violent action thriller but this is a real life. Aicha Macky goes where her male director colleges would not dare to go: unflinchingly into the heart of darkness. AS