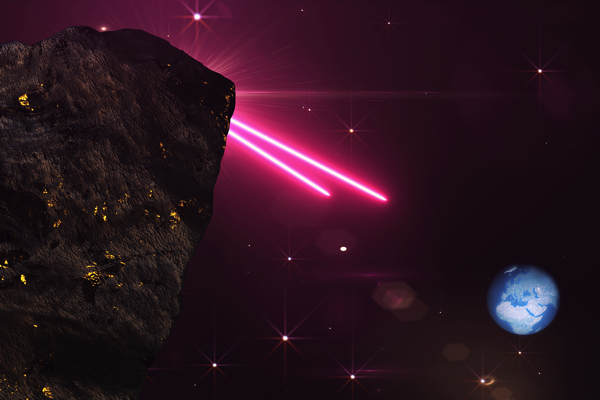 Directors/writers David Zamagni and Nadia Ranocchi make an ambitious and inventive attempt to re-enact the Odyssey of Hercules through the ages. Essentially a series of twelve very diverse vignettes, or chapters, the audience might struggle sometimes to see the common denominator. Some scenes are very short, the longer ones invite multiple interpretations.

In #1, Hercules is flying through the cosmos, to land on planet earth. We are promised that he will fight Babylon, Rome and the Indians. Also vampires and Aliens. In #2 we see a teenager and other males wrestle with a soft torso in a gym. Number three is set in a bullring, where the bull is of the mechanical sort and is driven on a go-cart for the matador to joust with. In number four we can watch a car being destroyed by a special machine, toying with the wreck like a cat with a mouse. Afterwards a car tries to pull a heavy metal container, only to go up in smoke. Number six is centred around a girl in the woods taming two snakes. Number seven features a cloud formation shot at by lights, until it completely disperses. Number eight is set in a luxury food store, where an employee is overtaken by a mysterious illness and takes up a staggering dance, before leaving the shop at the second attempt. Number nine is set in a Greek monument, featuring a burning urn, not unlike the one used in the Olympic torch ceremony. A man disrobes, we see that he is clad in a classical white Greek costume. Then some girls in the same outfit dance in stop motion. Number ten is a continuation of the previous instalment, this one featuring two men in white outfits fighting in front of the urn. One is thrown to the ground repeatedly, the victor runs away eventually. #11 is the most sophisticated sequence: a service man in a petrol station listens to the TV mounted above him. An announcer talks about the beauty of the city of York. What sounds like a tourism ad, turns out to be an exercise for students learning English as a second language. The young man gets up and goes outside, and smells the inside of a parked car. When another car turns up in the forecourt he services it, only to be attacked soon afterwards by an intruder. Their fight is shown like a shadow-play behind see-throw curtains. The man gets finally up after the intruder has gone and – after a cut – he goes to a different petrol station to service another car. In the final episode a band of two plays to an audience loud rock music, with other men climbing up a wooden pole. The venue is caged in, making the men looks like trapeze artist under a circus roof.  All these episodes are more or less enjoyable, DoP Monaldo Moretti showing great inventiveness in solving the various issues that come into play embracing narrative, documentary and experiment modes in motion, unpacking an ancient myth before re-examining it through modern eyes. Zeus Machine is best watched as a curio, without too much underlying meaning. Entertaining none the less. AS