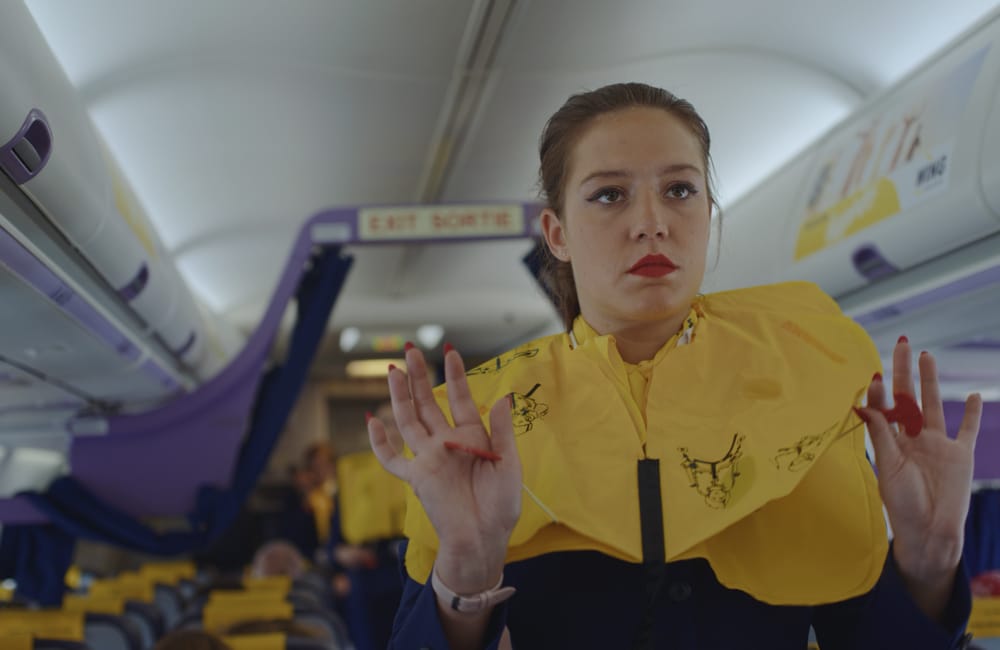 This bizarre but brilliant first feature for French duo Emmanuel Marre and Julie Lecoustre follows a shameless young air-stewardess on a flight to nowhere, emotionally speaking. We soon understand why.

Cassandra (Exarchopoulos from Blue is the warmest Colour) works for a budget airline mostly around Europe. She dreams of being hired by Emirates Airlines or even a high-paying company called Private Jets, but speaks only a little English apart from French.

From her base in Lanzarote relationships are tricky so she signs out of reality, keeps her family at a distance and opts for an online life on Tinder under the pseudonym ‘Carpe Diem’, a bare-breasted selfie setting the tone for some casual sexual encounters. In some ways she is typical of the resigned young millennial who literally doesn’t care what happens as long as she’s having fun.

Not only is the job repetitive and unfulfilling, Cassandra spends most of her time in airline terminals, a hostile and alien environment made worse since Covid. Drugs and disco are her favourite release on breaks from the inflight tedium. When her contract runs out, she is re-assigned to a course that includes saving passengers with CPR – an exercise Cassandra fails dismally, unable to interact even with a dummy: “You are breaking all his ribs” the course leader tells her, after Cassandra pummels the model doll mercilessly. Job follows job largely down to Cassandra’s ability to sell her persona on Zoom interviews ‘Seize the day’ very much captures the economic and social climate of this disposal world.

Exarchopoulos gives a stunning performance as the women “with no attributes”, an empty vessel not even trying to find an engagement with the outside world. She is vague to the point of disowning herself, constantly on the move in transit positions. She is the modern young woman honed for the quick-turnaround of her professional life, opting for a quick fix while treading water in the hope of a better opportunity, always with her eye to the main chance. Cassandra is the opposite of her sister and father: rootless and uninterested in her past, leaving them to fight with the emotional consequences of the mother’s death. DoP Olivier Boonjing excels with the cold airport images where contrast, the warmer colours of Cassandra’s hometown. Zero Fucks Given is certainly original: an almost sinister study of a modern milliennial. Hugely recommended. AS