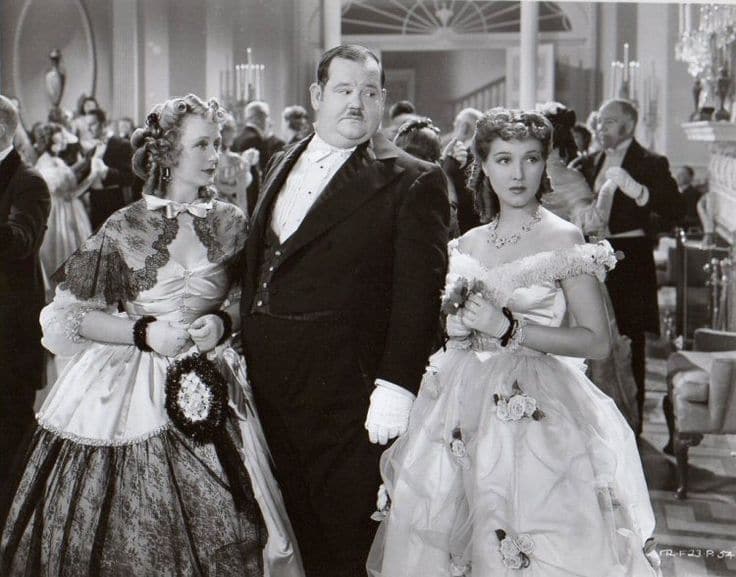 This unusual title – aka Elephants Never Forget – is familiar to most cinephiles as Oliver Hardy’s one starring vehicle of the sound era without Stan Laurel; and aided by an excellent supporting cast he carries the film extremely well. Playing the beloved local doctor of the fictitious town of Carterville, Mississippi in 1870, the Southern setting well suits him, and provides him with a context in which to exhibit the same Southern courtliness without being the pompous buffoon he usually was when teamed with Stan Laurel. He gives a performance of grace and charm, even dancing a few steps with spouse Billie Burke, and shows a concern for the underdog that extends to the little black kid played by Philip Hurlic that is reasonably lacking in condescension for 1939, let alone 1870. While it doesn’t even attempt to be as funny as Hardy’s work with Laurel, the film is however characterised by the charm and lack of sentimentality which remain one the principal reasons that Laurel & Hardy’s work has worn so well to this day compared to that of Chaplin.

When you see Step’in Fetchit billed with his name ‘humorously’ spelled thus in the credits you fear the worst, although in the film that follows his mistress Billie Burke is actually dafter than he is. Hardy’s comments about Southern segregation are later underlined without labouring the point by a fleeting shot of Hurlic, Fetchit & Hattie McDaniel watching the trial through the courthouse window rather than from the public gallery. This film is often spoken of as an ersatz Laurel & Hardy film with Harry Langdon filling in for Laurel, but Langdon’s is really only a supporting role, although he acquits himself well, the old gestures from his silent films are still there, and it’s interesting to both see and hear Langdon for once. Both he and Hardy look remarkably comfortable around Miss Zenobia, who plays the title role. @RichardChatten