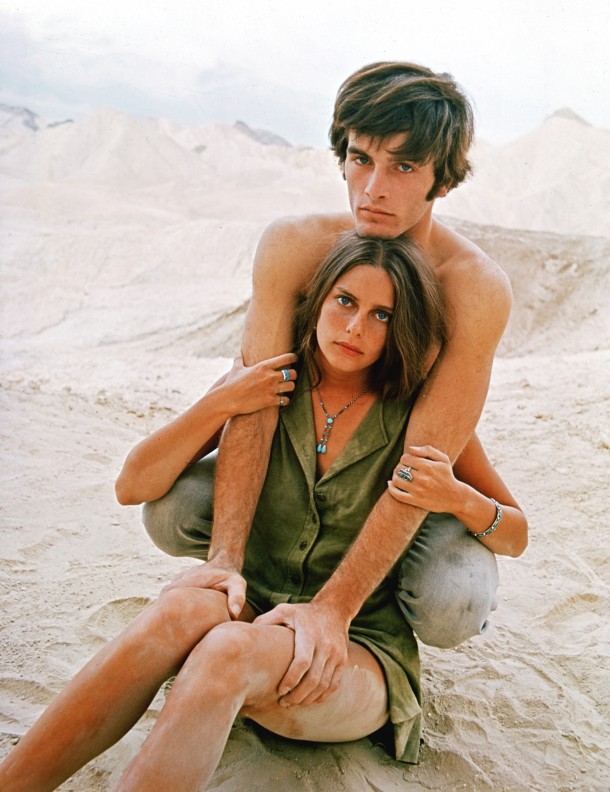 Zabriskie Point was an unmitigated commercial failure at the box office but has since become somewhat of a cult classic largely due to its atmospheric, otherworldly score by Pink Floyd complimenting ravishing widescreen visuals of Death Valley. Along with Blowup (1966) and The Passenger (1975) it completes a trilogy of English-language films made by Michelangelo Antonioni. Critics were not very kind at the time of the premiere: Pauline Kael wrote: “Antonioni has always been a clumsy director and has never had much luck at solving the mechanical problems of how to get his characters in and out of places”. But when you realise the Americans, as a nation, didn’t like themselves at the time, why should they like foreigners holding up a mirror?

ZABRISKIE POINT is not a masterpiece, but a rather misunderstood film poem that became at important signpost in US counter-culture of the time. Since everyone wanted to see action and revolution, nobody was happy: neither the European art house audience nor the American counter-culture brigade. Strange to think that anybody could expect ‘action’ from Antonioni; and his sort of revolution was mainly an internal process, slow burning and with a lot of self destruction. The only point worth making is that Antonioni himself tried too hard to please the audience – just leave out the fireworks and shoot in black and white and all what would have worked out much better. But then, he could have stayed in Italy. This way, he fell between two stools, but there is still a lot to admire about ZABRISKIE POINT.

The narrative is sparse: Mark (Frechette) is at a student’s meeting in LA “willing to die, but not of boredom”. Later he nearly shoots a police officer during a violent demonstration, steals a small plane, circles in the desert over a Buick, driven by young, naive pot-smoking Daria (Halprin). Later the two meet, make love in the desert, “Zabriskie Point” being the lowest one in the whole of the USA, before Mark paints the plane full of political slogans and psychedelic colours, and on landing is shot dead by the police in LA.
ZABRISKIE POINT is predominantly a road movie, with some Western thrown in. But is not political, let alone revolutionary. Yes, what we see about America is rather ugly and violent, not much change there, but Mark’s actions come from the heart: he wants fun, sex and travel. Sure, the police are in way way, but not as a collective political force.

In the end, ZABRISKIE POINT is just about a man lost in the vastness of LA, needing another point of view (like most of Antonioni’s heroes), finding Daria in a sort of no-mans-land, where happiness can exist, before choosing to go back to the city and death, spurning his second chance. Alfio Contini’s camera paints both the vast city and the valley in the desert as a melancholic death dance. AS/MT

RE-RELEASED FROM 24 OCTOBER AND AVAILABLE ON DCP FOR THE FIRST TIME – IMAGE SUBJECT TO COPYRIGHT OF WARNER BROS ENTERTAINMENT INC.