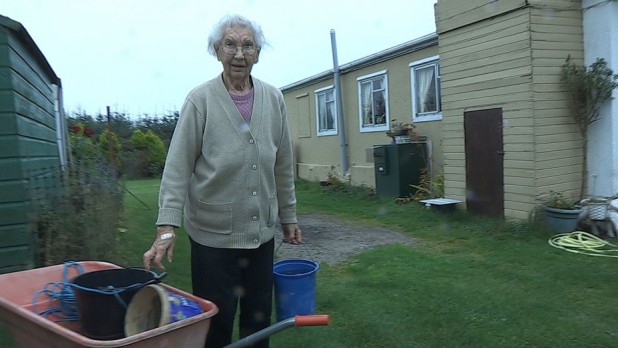 Anthony Baxter’s sequel to his 2011 film about a certain wealthy US Businessman’s clashes with his Scottish neighbours during the building his luxury golf course (in Balmedie) feels very much like a re-hash of the original. The only thing that’s changed is that Donald Trump is now in running for the American presidency while poor old widow Molly Forbes (92) is still trying to get running water on her property.

Playing out like a comedy – if it weren’t so tragic – YOU’VE BEEN TRUMPED TOO – is a series of episodes garnered from Baxter’s previous socially-minded and earnestly intended documentary YOU’VE BEEN TRUMPED. It certainly doesn’t make for an engaging watch or an informative one either, unless, of course, you missed the original. Baxter zips through the content like a CNN broadcast, rehashing the familiar news footage of Trump’s campaign interwoven with talking head interviews from both sides of the fence.

But just to recap, Molly Forbes and her farmer son Michael were left waterless when Trump’s builders broke through a pipe that supplied the Forbes with running water. While Mollie chunters around with buckets and kettles etc, Trump speaks very highly of the long-suffering Aberdeen granny, likening her to his mother. On the subject of her son Michael, Trump is less flattering referring to “the disgusting condition in which he lives”, simply because the boy spends his day riffling through rusty old machine parts before reclining on a battered tartan settee. Needless to say, this homespun pair have been offered full use of Trump’s 5 star Golf course, but no running water to their home.

Baxter’s documentary is wafer thin with new facts but stuffed full of election information and Forbes’s visit to the US in a bid to confront Trump’s supporters. Needless to say, he is unceremoniously told to back off by all and sundry. It’s all really rather inconclusive as to why, even now, the Forbes’ can’t get running water from a chap who has billions. And crucially, Baxter fails really to come up with a decent answer, or better still, a solution from anyone in team Trump.

More interesting would have been a documentary about Donald Trump himself – there have been several on Hilary. After Baxter’s first documentary was aired on the BBC, Trump agreed this time to appear in person. Surely a candid and informative film about Trump’s own life and background would have been preferable to this non-event? MT

OUT ON 4 NOVEMBER AT SELECTED CINEMAS NATIONWIDE.