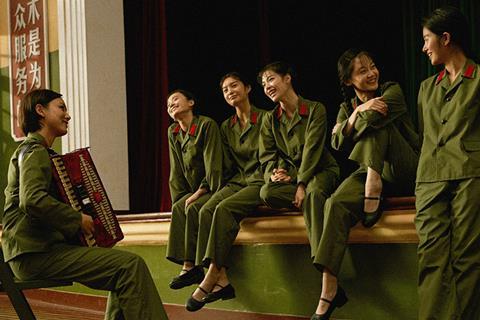 Feng Xiaogang (I Am Madame Bovary) is widely considered as China’s answer to Stephen Spielberg, and he certainly proves himself in this crowd-pleasing if over-ambitious drama that straddles an entire generation of young Chinese, caught in the vortex of political and social change.

Setting off in the 1970s this magnificently-mounted saga tries – and initially – succeeds in being all things to all people: a musical laced with political commentary; a tragedy of war and of first love all narrated by Xiao Suizi (Chuxi Zhong) a dancer in a military troupe where another young woman He Xiaoping (Miao Miao) has just arrived determined to escape her troubled background by making a name for herself. The professional dancing standards are exacting even by Chinese considerations but He does her best for the national cause despite bullying from the other girls. Feng (Xuan Huang) takes her under the wing and the two grow close.

While the dizzy backdrop of political events unfolds – Chairman Mao’s death is a highlight – the troupe (the the drama) powers on at a relentless pace amid rivalries, and romantic crushes all masterfully recorded by Pan Luo whose energetic camerawork darts around taking it all in.

With Chairman Mao gone, a new sense of confidence invigorates the troupe and, slowly, materialism rears up in the face of the previous hardships as the film segues into a bloody depiction of the Vietnam War and its salient Chinese protagonists. Meanwhile, our own heroes don’t get away lightly during the decades – and we feel for them, especially Liu Feng whose dedication and sacrifice shines through, while He seems also to be misunderstood. As time marches relentlessly on, the film loses momentum as the focus becomes more scattered, its previous authenticity turning soapy in contrast to the convincing earlier scenes.

Overall this is an entertaining romp through the Chinese history books, its schmaltzy score milking the memorable moments with a rousing gusto that Chinese audiences will relish and take to their hearts. MT