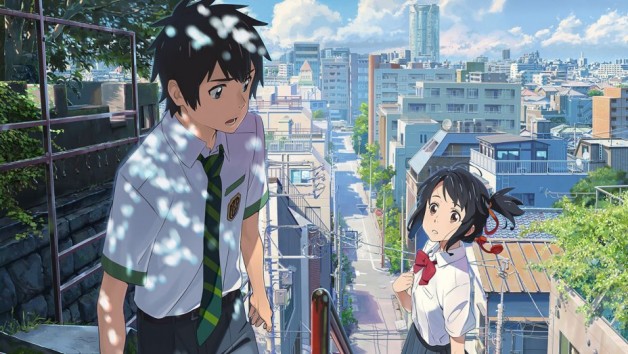 If you’re missing Studio Ghibli, then Makoto Shinkai’s runaway anime ‘love story’ will certainly fit the bill, even though it doesn’t quite match up to the subtly magical humanist undertow achieved by the legendary Hayao Miyazaki and Mamoru Hosoda. Billed as a Sci fi fantasy, this body-swapping romp is a sheer delight, even if the ending may leave you perplexed. It tells the story of a Tokyo schoolboy and girl who undergo weird out-of-body experiences just when a comet is passing over Japan.  But when they try to meet up back in their own bodies, real romance turns into a bittersweet and often strangely humorous affair. YOUR NAME is strangely similar in its narrative to the recent Swedish film Girls Lost.

The comet element also vaguely echoes Japan’s 2011 tragedy when a tsunami and an earthquake wreaked havoc on the population. This is conveyed in a startlingly gorgeous opening sequence where earthbound missiles fall through the sky like incandescent fireworks. Fragments of the comet alight in the countryside where Mitsuha is living with her grandma, in a cottage beside a lake. But Mitsuha craves other bright lights: those of Tokyo, where Taki (Ryunosuke Kamiki) is working as a waiter in the evenings after school. One day he wakes up in Mitsuha’s body, complete with breasts and other female attributes. Needless to say, Mitsuha is coping with Taki’s male bits and finding school quite a challenge, especially going to the loo. But her intuition works well when as Taki, she has a crush on a older girl.  Several times they actually wake up, and eventually manage to fathom out what is going on with their bodies.  It soon emerges that Mitsuha is actually three years ahead of Taki, living before the disaster that destroyed her town and many of neighbours.

Although Shinkai’s multiple plotlines start becoming rather confusing, largely due to memory loss that occurs when the two morph back into their own bodies, this is an impressive anime feature. And although some of the musical choices feel rather out of place with the dreamy status quo, this delightful and delicately rendered visual feast is appealing and entertaining to watch. MT