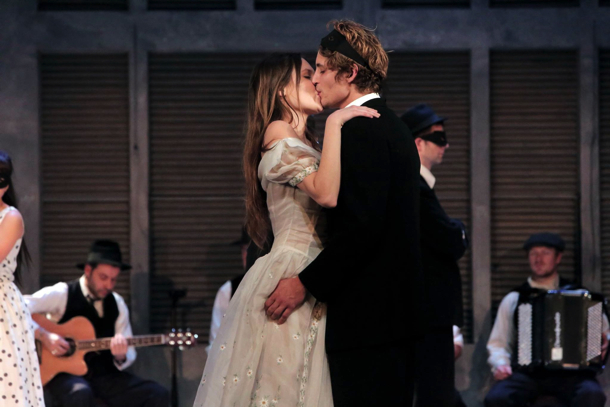 You and The Night (2013) Les Rencontres d’apres Minuit

First films are rarely as self-assured as Yann Gonzalez’s LES RENCONTRES D’APRES MINUIT (YOU AND THE NIGHT). As it is always the case for French filmmakers, there is something to fall back on: in this case the surrealism of Robbe-Grillet or the poetic realism of Jean Cocteau. Gonzalez borrows heavily but puts his contemporary stamp on it. Ali (Kate Moran) and Mathias (Niels Schneider) have been lovers for over hundred years. To celebrate, aptly supported by their bi-sexual Maid (Nicolas Maury, they give a party inviting the Stud (Eric Cantona), the Star (Fabienne Babe), the Slut (Julie Bremond) and the Teenager (Alain Fabian Delon). All play their roles against type, and lots of contradictory emotions emerge. But there is always enough wit, particularly from the Maid, to prevent it all becoming too serious: this is after all a film about sexual hang-ups and how to deal with them. In the end, Matthias opts out of eternal life but Ali and her Maid immediately recruit his successor: the angel faced Teenager. An entertaining cameo from Beatrice Dalle as the ‘male’ Police commissioner who tries to have his way with his prisoners, is also worth a mention. What makes YOU AND THE NIGHT so entertaining (and that is its main objective), are the aesthetics that conjure up a nightly garden of rich dreamscapes in which the main characters act out their phantasies. True, surrealism and poetic realism play their part in the jamboree but the filmmaker makes it quite clear that this is the 21st Century, where everything is possible. Apart from the brilliant sets and the innovative camera-work, the ensemble work is outstanding, helping to cover some weaknesses in an uneven script. In many ways, a real eye opener. AS