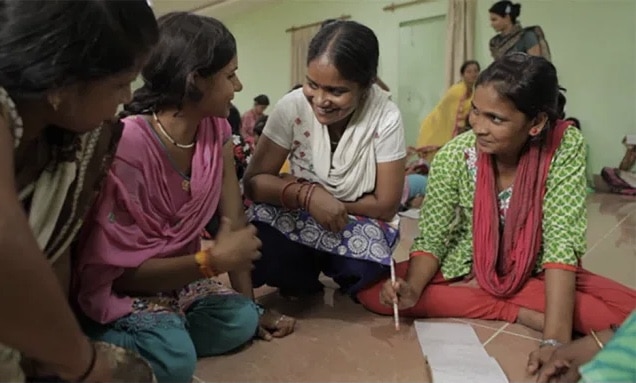 This Oscar nominated documentary by first time feature directors Rintu Thomas and Sushmit Ghosh (also co-DoP) once again exposes an endemic culture of police corruption, bribery and misogyny in Indian culture seen through the ‘Khabar Lahariya’ (‘News Wave’) newspaper. The publication was founded just after the turn of the century by women of India’s lowest cast – the Dalit, and operates out of Uttar Pradesh, a region which usually votes for the winning Party in the General election – and this will play a big part later.

We begin with chief reporter Meere interviewing the victim of a brutal rape, and her shocked husband. Meere then walks straight into the police station to demand why nobody has been charged with the assault. Alarmingly the police are not interested in helping the victim. Clearly they are not there to serve the people or enforce law and order, but to trouser lavish bribes from their venal local overlords who continue to operate with impunity.

Although the “Khabar Lahariya’ is now digital, at the end, with 125 million followers on You Tube, the journalists are not really taken not seriously – even by their own husbands – one proclaiming the whole operation will fail.

During the 2019 election, the sitting candidate of the region left his own party, and joined Prime Minister Narendra Modi’s BJP. When interviewed by the women he gives the usual lip service to fighting corruption, if re-elected, since the BJP will allow him to be active on this front, unlike his old Party. Modi and the BJP won in a landslide, not only in Uttar Pradesh. But already a week later, the journalists are repressed by members of the BJP, wearing orange outfits, and pretending to represent religious groups. The danger of absolute Hindu nationalism is obvious.

The fate of the individual members of the newspaper is also told, centring around Suneeta, Meere’s best ‘student’. Disappointingly she then decides to give up her profession and marry. Lost in that immediacy is a deeper historical look at the paper itself; while we understand its creation was unique, Writing with Fire is so invested in the present that the filmmakers fail to offer key information about its founding.

Still, now is as good a time as any to follow the paper and its evolving reporters as we watch Khabar Lahariya grow in size and influence. It’s a double-sided coin: Increased visibility means increased impact, for the journalists and their subjects, but it also places the women in the crossfire of anyone opposed to them (and that’s plenty of people, especially as the country enters a key election period).

The personal toll is never far from the frame, and while some of the documentary drags as its filmmakers cycle through repetitive scenes (a husband rolling his eyes at his wife’s work, a family railing against the impossibility of marrying off their daughter, a puffed-up subject refusing to talk to female journalists), they also put the audience very much inside the world of Meera, Suneeta, and Shyamkali.

A startling finale makes Writing with Fire one of the finest features ever made about journalism, a real eye opener. AS