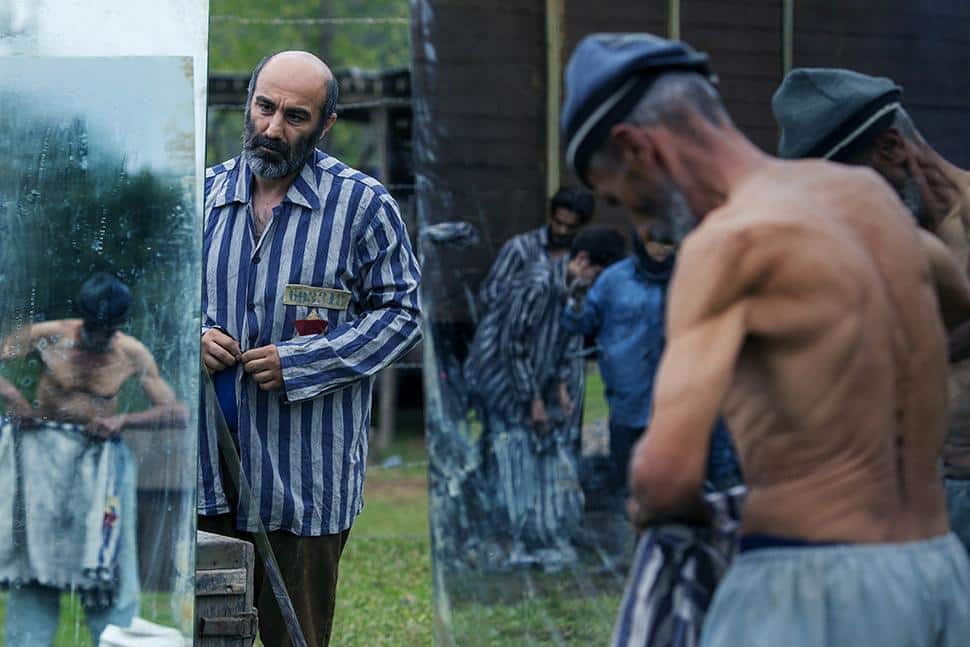 A sardonic streak of deadpan humour lights up Houman Sayyedi’s pitch black parable that sees a humble labourer’s life transformed when he lands the star role in a film.

Deep in the Iranian countryside on a rain-lashed building site Shakib (Tanabandeh) is homeless and alone in the world after losing his wife and son in an earthquake. Things  looks up when the modest drifter is offered lodging and a bit part in a feature film about Hitler’s atrocities, shooting nearby – the only condition: no friends or family can stay. So Shakib’s death mute girlfriend Ladan must make herself scarce.

The days on set are hectic with Shakib rushing around in crowd scenes dressed up as a concentration camp detainee – striped pyjamas and all. In another stroke of luck, he then lands the role of Hitler – a man whom he has never heard of – and a swanky new pad in the prefab that houses the main crew. But Ladan puts her foot down, a plan to smuggle her into his comfortable billet will have unimaginable consequences, potentially ruining his big break. Then her violent guardian appears on the scene demanding cash to the tune of 20k from the new “film star”. This is the least of Shakib’s problems in a morose and meandering morality tale like only the Iranians can tell.

Sayyedi had Hannah Arendt in mind when crafting World War III, and her words certainly ring true : “Societies ruled by totalitarian regimes are the most effective creators of anarchists”. With a whip-smart script the director and his writers strike just the right balance between dark humour, tragedy and melodrama, although melodrama slightly wins out in the cataclysmic finale where poor Shakib – a decent man driven to distraction and brilliantly played by Mohsen Tanabandeh – will fight tooth and nail for what really matters most. MT