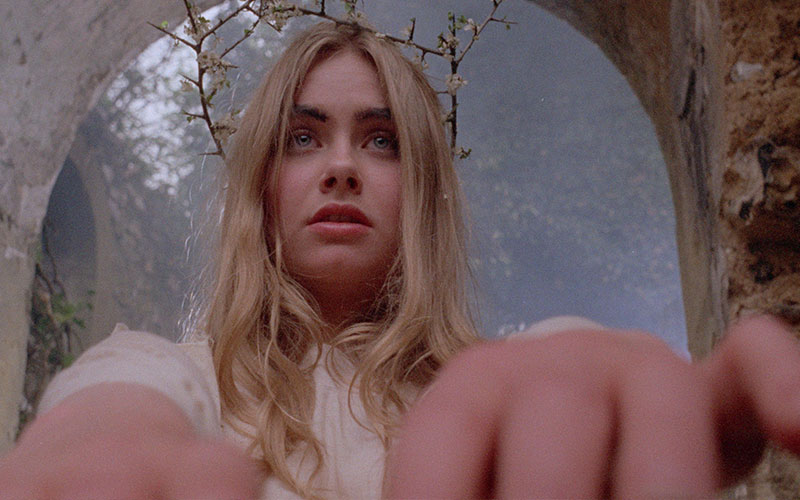 Everything you wanted to know about horror films: this immersive three hour documentary is an expansive study of the macabre genre of “folk horror”  from the lurid to the surreal and downright ghastly. A gruesome and immersive trip to Hell signposted by the trilogy of cult classics: Michael Reeves’ Witchfinder General (1968) Piers Haggard’s  Blood of Satan’s Claw and Robin Hardy’s The Wicker Man.

Canadian filmmaker and scholar Kier-La Janisse embellishes her film with insightful talking heads and over a 100 clips from the archives, to explore how “Folk horror” came into being relatively recently, casting a spell over a growing audience with enigmatic qualities often escaping definition yet firmly rooted in the countryside with local mores and primitive superstitions providing its down to earth life blood, sustained by a fear of the unknown. This “juxtaposition of prosaic and uncanny”, coined by author and actor Jonathan Rigby, lies at its heart.

A must for genre fans Woodlands Dark and Days Bewitched also provides a valuable potted history for newcomers, divided into six chapters, for ease of reference. Commentatory from occult experts, historians and cult filmmakers enriches the informative brew.

The only two surviving directors from the unholy trilogy also give their pennyworth on their rural cult outings: Robin Hardy’s terrifying ‘pagan meets pious’ tale The Wicker Man (1973) and Piers Haggard’s The Blood on Satan’s Claw (1971) a tale of villagers fearing possession by the Devil in 17th century Christian England.

Britain has always harked back to past socially and architecturally, and so UK folklore provides a particularly rich trove to draw with its rural  traditions and literary heritage of ghost stories and the supernatural. American directors can mine the puritan sensibilities of the pilgrim fathers onwards for their source of folk horror. Here Robert Eggers talks about his breakout revivalist features The Witch and The Lighthouse. Janisse then skates more broadly over the international scene showing how folk horror in countries such as Australia and South America is largely influenced by Colonialism and its literary traditions of magic realism. Canadian cult filmmaker Guy Maddin also makes an appearance talking about his surreal, award-winning work.

Janisse has crafted a worthwhile and entertaining compendium film that can be enjoyed in an afternoon, or dipped into from time to time. MT