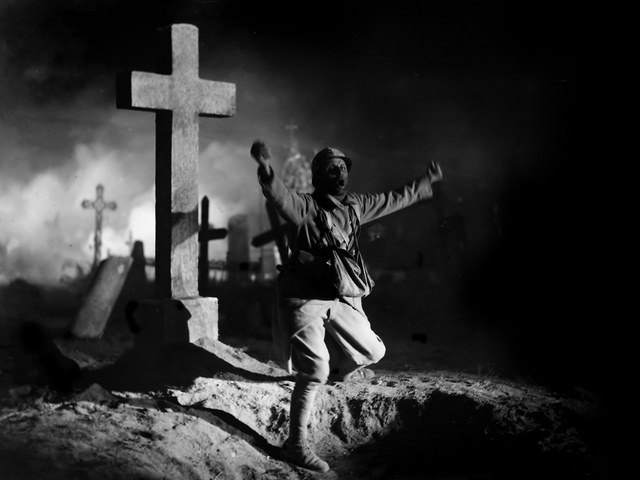 One of the greatest wartime films LES CROIX DE BOIS is a work of staunch realism filmed in sombre black and white and re-launched to commemorate the onset of the Great War in 1914. Released in 1932, it provided a stark contrast to other Hollywood fare that year: Tarzan, Shanghai Express, Blonde Venus and I Am a Fugutive from a Chain Gang. The impression its simple message of truth and tragedy made was overwhelming. Today it remains a valuable record of heroism: thrilling, pitiful but above all, sincere.

Adapted closely from the literary work by Roland Dorgelès, (who served as a corporal in the 39th Infantry Division), even down to the dialogue passages, WOODEN CROSSES is expertly-crafted to present a searing account of one regiment’s experience of the battlefield, without the romanticism of All Quiet on the Western Front (1930); Hearts of the World (1918) or A Farewell to Arms (1932) or the glory of King Vidor’s The Big Parade (1925); Howard Hughes’s Hell’s Angels (1930) or Howard Hawkes’ s The Road to Glory (1933).

WOODEN CROSSES tells it like it was, without melodrama or exaggeration yet still expressing the poignancy of simple acts of martyrdom as the soldiers share cheerful bonhomie and dark humour, keeping their emotions in check with courage despite the awfulness of it all. And although the story is seen from a French perspective, the appeal is universal and evergreen. It is the true account of a soldier who is, in essence, Everyman. Set in 1915, in Northern France, the film depicts the dark months of the 39th Battalion that ended in tragedy for all concerned. A call to arms that started with the hope of success and triumph, ends in a row of wooden crosses. Pierre Blanchar plays law student, Gilbert Demachy, who signs up to join the war effort along with other ordinary men: bakers; farmers and manual workers. After a gruelling series of events depicting courage and loyalty in the face of endless defeat, Gilbert Demachy ends his life alone in the mud of the battlefield, as the parade of surviving soldiers marches on, each carrying a wooden cross. MT