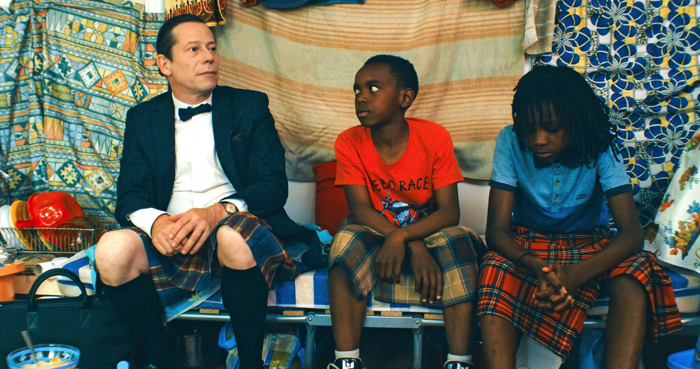 Seasoned actress turned Jean Balibar first satirised France in Par Example, Electre, starring and directing alongside Pierre Leon. Six years later her stylish but structureless solo attempt at anarchic comedy is far from wonderful but certainly colourful. Shot on location in the Parisian suburbs of Seine St. Denis and Montfermeil, it features over seventy locals and a star-studded cast, but sinks under the weight of conflicting ideas.

Kamel Mrabti (Bedia) and his wife Joëlle (Balibar) are a divorcing couple at the centre of the unfolding political farce. As active members of a new task force they are working to revitalise the locale with some exciting ideas, and although their marriage is over and new lovers have already entered the fray, the two must support their latest mayor Emmanuelle Joly (a fine Beart) in implementing a set of initiatives that include the new Montfermeil International School of Languages with the teaching 62 local languages; the ‘slowing of urban rhythms’; the introduction of a ‘Nap programme’; and social support for sexual satisfaction.

Marijuana is not only legalised under this new regime, it’s actually provided by the council, along with fresh vegetables. Naturally this is all very New Age and exciting. But behind the scenes chaos rules: the Mayor is losing it slowly, undermined but a more senior government official, and Kamel is suspected of being in league with Paris – the big enemy of devolution. Meanwhile, Joly’s secretary is learning Mandinka to keep up with her Malian lover, and the Army is lurking in the woods nearby, ready to strike.

DoP Andre Chemotoff’s visuals vamp up the histrionic mayhem in a production that looks slick and very professional. And although Amalric, Beart and Balibar shine in the leading roles they can’t rescue Balibar’s rather flawed script: breaking eggs on a sculpture of President Macon is, like the whole affair, not particularly original or impressive. MT