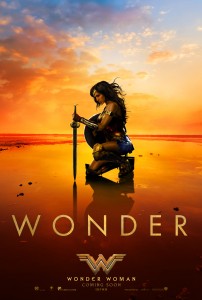 That sound you can hear right now is hundreds, if not thousands, of film writers and critics breathing a huge sigh of relief that they won’t need to think too hard about the positives in DC’s newest reboot of Wonder Woman. With a cast straight out any fanboy and girl’s dreams and more roles for women over 40 than you can shake a stick at, WONDER WOMAN is not only a welcome break from the usual male-centric superhero movies, but it also presents its audience with a truly engaging and thoroughly enjoyable storyline. Staring Israeli actress Gal Gadot and directed by the excellent Patty Jenkins (Monster, 2003), the film manages to cleverly avoid the usual pitfalls of big summer blockbusters by offering up a plethora of very likeable characters and a wonderfully engaging plot. Fans and foes alike will have to admit that DC has finally got a big hit on its hands, and the fact that this was a female lead superhero movie is even sweeter for some.