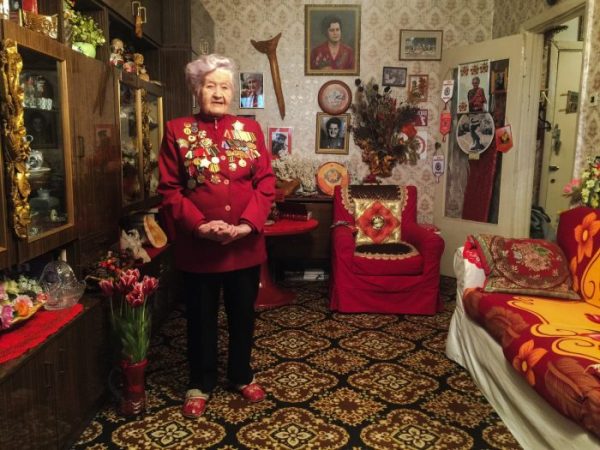 International Women’s Day is a significant date all over Eastern European celebrated on the 8th of March with men offering their partners flowers.

Bulgarian born, London-based filmmaker Dolya Gavanski (Golos: Ukranian Voices) explores the experiences of a number women who have grown up in the USSR – from the early years of the 20th century until quite recently. The result is revealing. The Soviet past still resonates today in Putin’s Russia, But it has left the female population with an undeniably sense of resolve: “What do I do with flowers, when my husband is totally drunk in the evening? posits one feisty female. Clearly floral tributes are not cutting the mustard anymore.

Internet celebrity Elena Krygina, a woman in her early thirties, agrees with the sentiment. “It’s more a question of make-up. Everybody looked the same in the USSR.” But there are others, who feel very different, like Natalya Kalantarova, director of the Krasnogorsk Archive. She points with pride at an emblem of the Soviet State on top of a building. “Everything about the USSR is worthy. We have very little about Yeltsin and Gorbatchev”. She makes sure the filmmaker gets the meaning of the last sentence.

Meanwhile forty something Estate Agent Natalya Tomacheva, has more disturbing memories from her days at Secondary School: “We had an Arabesque music cover from a western record, showing women lying down, with their legs up. So we decided to take pictures too, in our hideous Soviet knickers. The school brought us out on stage, in front of all pupils, year one to ten, telling us that we had succumbed to the influence of the corrupt West. Larissa Denisova’s mother stood up and shouted ‘What, my Larissa a prostitute?’ She sided with her daughter, but my Mum did not, she was a fanatical believer. Later we were re-integrated, but were always known as the ‘Pornographers’.”

Another example of Soviet ideology on the taboo subject of sexuality is told by Marin Gribanova, Dean of Classical Ballet: “Communist censorship interfered for example in Carmen, when we were asked to change some sequences. When the famous ballerina Plisetskaya danced ‘Bolero’, a very sexual piece, we got away with it but only because the women were dressed in black, and the men in white. The white ones would win in the end, making the women all look evil. Sex was turned into a fight between light and darkness.” This negativity seems to be reflected in the past that saw the Church dominating family life. At the end of the 1920s a “Childless Tax” was created, for couples who had less than three children. Even before the Second World War, in 1937, special camps were sent up for women whose husbands have been proclaimed enemies of the people and had been shot.

But some women’s lives were transformed for the good during the early part of the 20th century. One example is Maria Rokhlina, who proudly shows off her jacket with six kilos worth of medals. “Red is the colour of life; blue makes me think of cold, freezing.” As a 16-year-old she was sent to Stalingrad, surviving the battle as a medical instructor in the sanitary platoon on the front line. “I had to bandage the wounded, stop the bleeding, fix a fracture with an improvised splint, then evacuate them from the frontline”. Leningrad siege survivor Natalya Vasilyevna, remembers her grandmother saying very clearly at the beginning of the combat “’Forget about me. I won’t make it. I will not eat. I do not want to see you die one by one’. Men died first, they were actually the weaker sex. Used to eating more meat than women. There were lot of dead bodies in the street. War is a male culture, all war images are male.”

Finally, Svetlana Alexievich, winner of the Nobel Prize for Literature, reminisces  about the nuclear disaster at Chernobyl: “It was total chaos. The workers told us the fire had not been extinguished. It still glowed. People came from everywhere to see it. They took the children out onto the balconies and told them to remember this day, it because it looked so beautiful. People could not comprehend the modern reality”.

With DoPs Marina Kroutlin’s and Dmitry Loktionov’s impressive images, and informative archive material, Women’s Day  looks back into an era where reality and ideology collided. But it also pays tribute to those who were at the ‘coal face’ and bore the brunt of it. And it is proof that flowers alone are never good enough. AS