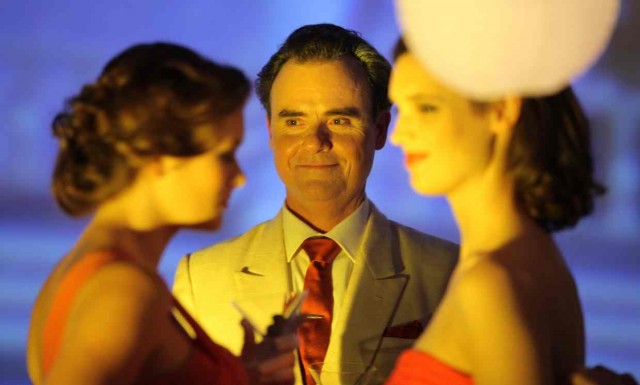 Gillian Armstrong is no newcomer to exploring the lives of fascinating but lesser-known, niche designers: her biopic on Florence Broadhurst – another Australian designer (famous for her exquisite hand-printed wallpaper) and her ongoing documentary experiment with three Australian teenagers (now grown women) such as Smokes and Lollies, Fourteen’s Good and Eighteen’s Better have received critical acclaim. Her latest, a documentary WOMEN HE’S UNDRESSED is as much a portrait of Hollywood in the 1940s as it is an exploration of the life of Oscar winning Australian costume designer Orry-Kelly. WOMEN HE’S UNDRESSED plays out as part theatrical chamber piece, making good use of its stylish archival material,  photographs and interviews with well known talking heads sharing pithy and gossipy insights. There are some stylishly imagined scenes performed by actors (Deborah Kennedy plays Florence Kelly and Lara Cox, Ginger Rogers) that take the lid off the fashion side of Hollywood film industry, giving the documentary an entertaining dramatic twist. Despite being largely unknown in his own country, we learn that Orry-Kelly was a prodigious talent who dressed stars in over 280 films during his lifetime including such legends as Baby Face, Casablanca, Some Like it Hot and 42nd Street. He literally  transformed actresses like Barbara Stanwyck (in The Lady Gambles) and Ingrid Bergman (Casablanca) creating a range of iconic costumes and stylish rigouts.

Clearly Orry-Kelly was gay, yet little emerges here of the costumier’s private life despite his candid efforts to be true to his ideals and authentic to the last: after marrying Randolph Scott, unlike many Hollywood characters, he made no attempt to cover up his sexuality by marrying a woman (unlike Cary Grant, Rock Hudson and so many others). Although not exhaustive, this is a watchable and welcome insight into Orry-Kelly’s life nonetheless. MT