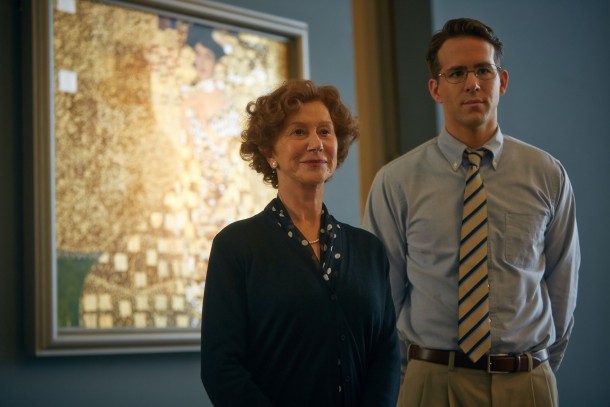 Helen Mirren plays the star turn here as a sensible elderly Jewish woman who sets off to Vienna with her reluctant young nephew, PHILOMENA-style, to recover the artistic heritage of her ancestors stolen by the Nazis. But Maria Altmann is no ordinary woman and the artwork in question is by Gustav Klimt, a painter from the Vienna Secession whose works now feature on fridge magnets and greetings cards. Amongst the collection is The Portrait of Adele Bloch-Bauer I who happened to be Maria Altmann’s aunt.

But don’t expect to discover more about this fascinating artistic era in turn-of-the-century Vienna. The focus in this light-hearted caper is the pursuit of justice and Maria Altmann’s nephew happens to be a lawyer, Randy Schoenberg (Ryan Reynolds). The painting is hanging in the Belvedere Gallery in Vienna and the only way of recovering it is to take the Austrian government to court for its rightful restitution. But why would Randy be interested in helping an old woman take on a lengthly and expensive legal case. Happily married to a placid wife (Katie Holmes) and with a baby on the way, and a new job in a Los Angeles law firm whose senior partner is Charles Dance?  Tooling through the internet, Randy then discovers that the painting is worth millions and so, tempted by the his aunt’s money and her delicious apple-struedel cake, he embarks on a journey back to his Jewish roots, to bring the painting back to his family estate. .

In Vienna the pair team up with an investigative journalist (Daniel Brühl) who helps them navigate the corridors or power with his local expertise, although his keen interest in the project is never revealed. Flashbacks transport us back to the 1940s where we meet  the younger Maria, an elegant Tatiana Maslany, and her father, an admirably proud and defiant Allan Corduner. These are the most enjoyable scenes adding historical texture and context along with those in the courtroom with Jonathan Pryce’s impressive vignette as the judge of the case. There is much negotiating and sifting through archives in dusty museum vaults. Eventually an outcome is achieved in a surprisingly moving finale. Once again Simon Curtis (My Week With Marilyn) serves up a dumbed-down but easy-to-digest and enjoyable slice of the past. MT

IN CINEMAS FROM 10 APRIL 2015 | REVIEWED AT BERLINALE 5-15 FEBRUARY. OTHER COVERAGE IS AVAILABLE UNDER BERLINALE 2015 IN THE SEARCH BOX