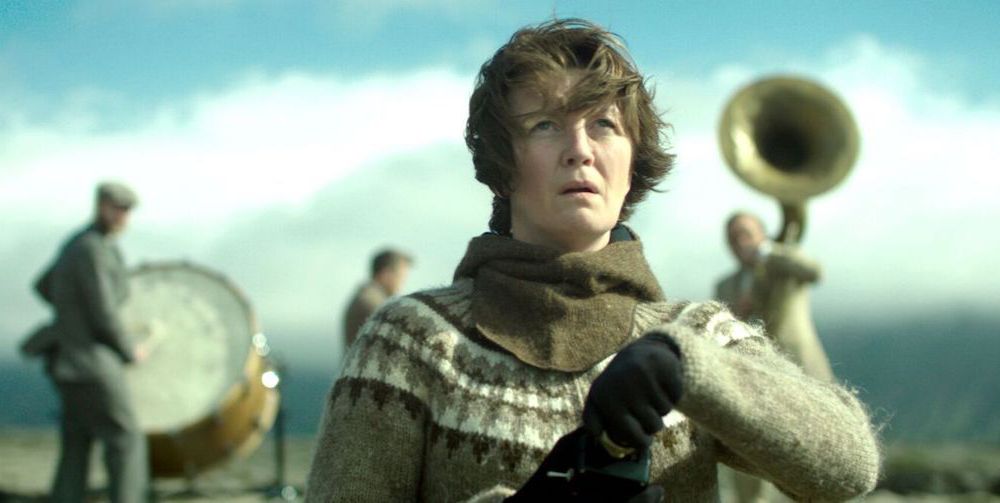 Benedict Erlingsson’s follow-up to Of Horses and Men is an energetic eco-warrior drama that sees a feisty woman taking on the state of Iceland with surprising results. Lead actress Haldora Geirhardsdottir has an athletic schedule, running all over the rugged  countryside, with helicopters and drones circling overhead.

Halla Haldora (Geirhardsdottir) lives a double life: one minute she is a mild-mannered physical therapist and choir leader, the next she’s roaming the countryside, bringing down electricity pylons with a bow and arrow and wire cutters. The only person aware of her war against the multi-nationals’ new technology is Sweinbjorn (Sigurdason), who works for the government and sings in her choir. She gets support from a local farmer, who could be a distant relative, and has a sheep dog called ‘woman’.

But her adventures have more severe repercussions for Juan Camillo (Estrada), who is under suspicion himself for bringing down the pylons. Another running gag in this amusing drama involves three women wearing the Icelandic national costume, who stand at the wayside during Halla’s adventures; a trio of musicians playing drums, the tuba and accordion. Halla’s twin sister Asa, also played by Geirhardsdottir, is a yoga teacher and is about to set off for an ashram in south-east Asia, when Halla gets the news that her adoption application has been granted. As a result four-year old Nika, whose whole family has been wiped out in the Ukraine conflict, is now waiting for Halla to pick her up. But misfortune intervenes.

With a magnificent twist at the end, Woman at War is a stormy but often amusing affair. There are echoes of Aki Kaurismaki, with the dead pan humour taking away some of the tension of the countryside hunt for Halla. And Erlingsson makes a refreshing break from tradition in the super hero genre, by casting a super-fit middle-aged woman in the central role.

Making good use of the stunning country side, DoP Bergsteinn Björgulfsson’s widescreen images and towering panorama shots are truly magnificent, along with the road movie sequences that showcase Iceland’s wild scenery. Perhaps a little too generous on the running time, this feature combines hilarious scenes with a well-structured narrative and a convincing female heroine. AS