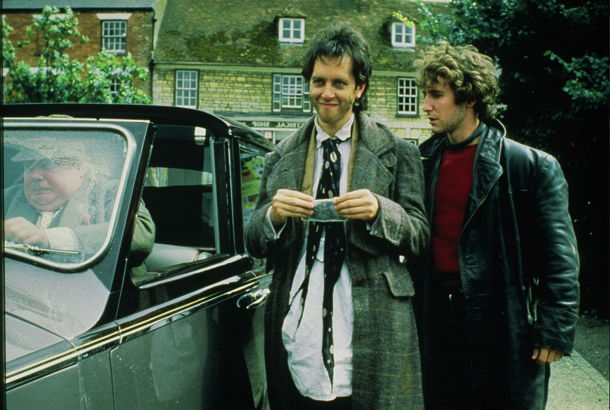 Withnail and I was Writer-Director, Bruce Robinson’s debut. And what an extraordinary debut it is. Yet the elements that make it into possibly one of the best British comedy dramas of the 20th Century are simple: A brilliant script, convincing characters; superb acting. In late sixties Camden squalor, it centres on two ‘resting’ actors on the verge of alcoholism who embark on a trip to the country where they find more squalor in Uncle Monty’s cottage.

With a script full of quotable gems and a unique chemistry of Richard E Grant in a subtle but ‘on the nail’ performance as a sneering upper class luvvie, and Paul McGann as his more down to earth flat-mate they contrast perfectly with the over-blown grandeur of the kindly but predatory Richard Griffiths as Monty (“I mean to have you even if it must be burglary”). Ralph Brown joins them as a nefarious drug-dealing hustler.

Set on location in a Victorian terrace squat complete with crumbling walls, dusty paraphernalia and a sink so foul it spawns its own eco-stystem, the pair decamp briefly to Uncle Monty’s chintzy Chelsea pad in search of hand-outs and sherry, then head to Cumbria for a rain-soaked bucolic dress-down by the local farmer and his randy prize bull. More drinking ensues and a hilarious interlude in the local tea-shop where the pair pretend to be film producers and Grant utters the famous phrase: “We want the finest wines available to humanity. And we want them here, and we want them now”.

Watch it, enjoy it and treasure its solid breeding. MT

ON DVD/BLU COURTESY OF ARROW FILM AND VIDEO.