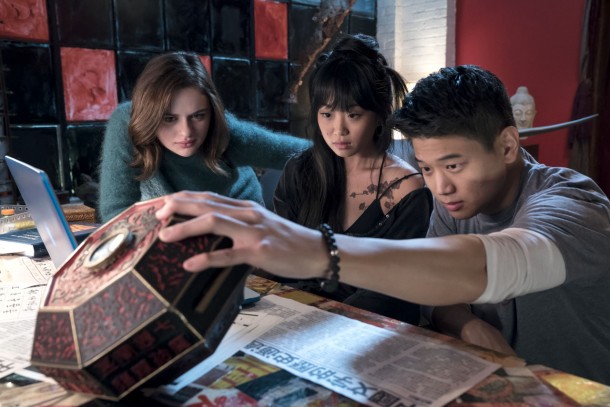 Director John Leonetti (Annabelle) directs Barbara Marshall’s clever script about teenage angst and crass materialism as a horror flick with depth. Unfortunately, the majority of the cast lets him down badly.

Claire (King), whose mother committed suicide when she was a child, is a very unhappy teenager at High School. She simply craves male attention and female admiration – but only her two friends June (Purser) and Gina (Lee) give her any support. After a catfight with blonde school-queen Darcie (Langford) in the school cafeteria, Claire’s Dad gives her a Chinese music box he found in the rubbish bin, which turns out to fulfil the seven wishes of its owner. Spontaneously, Claire wishes that Darcie will simply “rot away”.

Strangely, Darcie wakes up with very serious health problems – then Claire’s dog dies under mysterious circumstances. The pattern repeats itself Claire whose wish for a monster-inheritance and the love of Paul (Slaggart) come true, but people close to her die gruesome deaths. With one wish left, even Claire has twigged what is going on – but just a everything seems to go back to normal, a brilliant coup-de-grace is delivered.

WISH UPON shows the majority of teenagers to be self-obsessed big spenders. And Claire, like the majority of her peer-group, goes for nothing but looks in her choice of boy-friend: Paul is as empty-headed as possible. June and Gina are only too happy to go on a spending spree with Claire after her newly found wealth, and it seems more than odd that June should ask Claire “Why did you not wish for a cure of cancer?” – even though she has a point.

DoP Michael Galbraith (My Big Fat Greek Wedding) finds original angles on death by lift and kitchen equipment – to name a few – and Leonetti manages to find the right mixture of suspense and critique. But the cast lets the whole show down: swinging arms and rolling eyes are the main forms of expression, which is a pity because it takes away an underlying seriousness to what could have been a terrific mystery horror film. AS