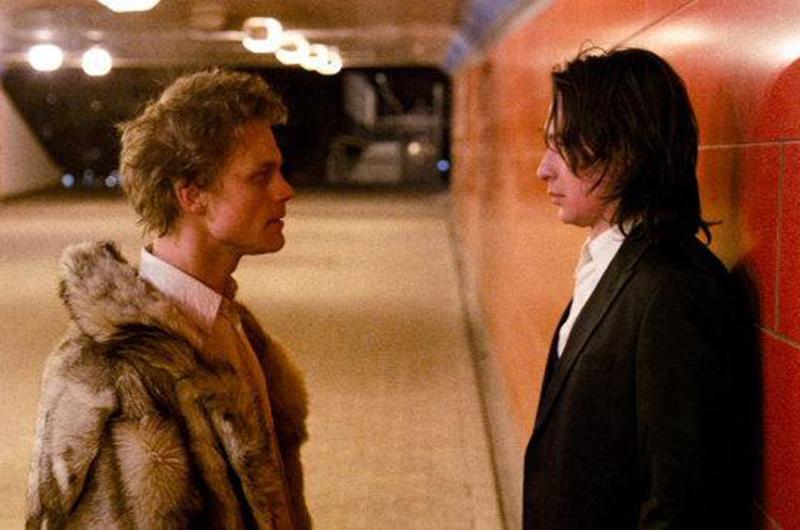 Winter Journey takes its title from Schubert ‘s “Winterreise” song cycle.  The central character is Eric (Aleksei Frandetti), a young, gay classical singer, who is preparing for audition at the Moscow State Conservatory when he meets his nemesis, Lyokha (Evgeny Tkachuk).

One of the standouts at this year’s Russian Film Festival, the feature is unlikely to be widely screened in Russia due to issues surrounding Putin’s new law criminalising ‘gay propaganda’.  But apart from a snatched kiss between Eric and the psychotic criminal he becomes involved with – there is very little to offend mainstream audiences but a great deal to entertain them in this quirky and visually engaging snapshot of Moscow’s contemporary bohemian scene.

In a snowbound Moscow, thawing round the edges – the voyeuristic camera offers insight into Moscow’s hard-bitten underworld: Cabaret venues, urban backwaters and waterways as well as the more traditional majestic architectural facades and panoramas of the capital. Reflecting the polarity that still exists in modern Russia, Lvokha’s disenfranchised world collides with Eric’s artistic one when their paths entwine during an altercation on a bus. Each leaves the scene with an item of the other’s property.

The story then follows them both: Lyokha gives an unflinching and raw performance full of anger and despair as he embarks on a brutally-violent crime-fuelled mission to survive on his wits from mugging young Russian yuppies to shedding tears of self-pity on hearing Eric’s rich singing voice.

Erik is more enigmatic as a member of Moscow’s romantic professional elite. Frandetti manages successfully to convey his ego-driven artistic sensibilities and his damaged psyche with considerable allure.  Prone to bouts of drinking and smoking, he too appears to be on a journey of self-destruction; although a more ‘Romantic’ one.  Caught up in a submissive relationship with a gay doctor; he hangs out with a crowd of cultured professionals- the most interesting of whom is Slava, who lives in an antique-strewn house and owns jewels purportedly inherited from the ‘Royal Family’.

Tkachuk won best actor for his role as the mercurial and ultra-violent psychopath who somehow pushes the buttons to ignite Eric’s passion. They scamper deliriously through the snow in the the film’s coruscatingly bleak dénouement, sumptuously evoked by Michael Krichman’s inventive visuals and enhanced by occasional bouts of the classical score highlighting the intense melancholia of the piece.

Directors Lvova and Taramasev are professional actors from a background of TV and film and this shows through in this directorial debut which aptly reflects the sentiments of Franz Schubert’s elegant yet mournful songs to piano composed when he was dying of syphilis. Perhaps the one entitled “Frozen Tears” best expresses the drama: “Frozen tears fall from his cheeks as he walks away, but the breast from which they arise is so burning hot with feelings that they should melt the winter ice completely”. MT