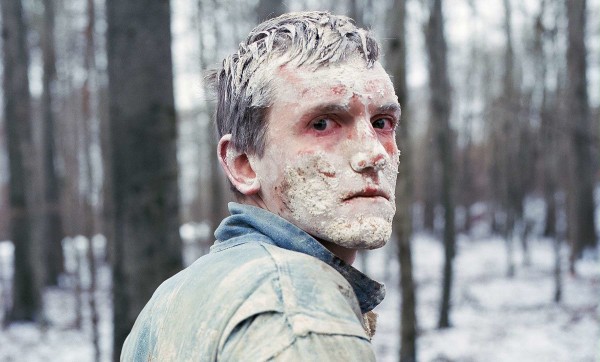 There’s a great deal to admire in Icelandic director Hlynur Pálmason’s stunning debut Winter Brothers (Vinterbrodre). Visually and thematically this is a intense portrait of fraught and uneasy brotherhood, but the narrative is too slim and meandering to really underpin this dour psychodrama.

Most of the action takes place in the dimly lit caverns of a remote limestone mine in Denmark where the brothers in question Emil (Elliott Crosset Hove) and Johan (Simon Sears) work together, their gruff conversations are often drowned out by the thudding industrial turmoil around them. Emil is the less appealing of the two and given to pinching anything he can lay his hands on, he also peddles his home brew to his fellow-workers. Johan is the more placid and older brother of the pair but clearly there is an uneasy competitive streak that threatens to erupt at any moment, and it does during one striking scene in this tough character driven piece with its occasional flinty sparks of humour.

It soon transpires that Emil’s liquor is a lethal concoction and potentially fatal for one of his workmates, turning the community against him. And as he emerges a victim, we ironically start to feel more sympathy for his mournful predicament as the lonely outsider, largely due to Crosset Ove’s skilful performance. As Emil, he also shines in the sequences where his boss (Lars Mikkelsen) brings him to heel and in his fascination for armed combat and training videos that leads him to obtaining an automatic rifle.

DoP Maria Von Hausswolff’s evokes the vastness of the wild snowbound Northern scenery to great effect, the only brightness coming from the miners’ helmets as they punctuate the bleak hell-hole of the mine. WINTER BROTHERS is a decent first feature showing a director mastering his craft and hopefully developing a stronger narrative in his next title. MT