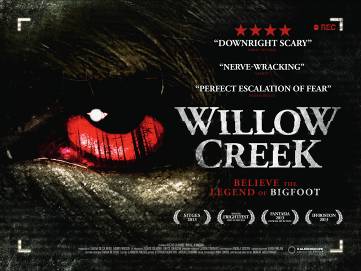 When Jim (Bryce Johnson) and his girlfriend Kelly (Alexie Gilmore) arrive at Willow Creek, a remote wooded location in Northern California and home to the legendary BigFoot – a huge ape-like creature that was captured on film in 1967 and terrified visitors ever since – the only real danger appears to be from mountain lions and rattle snakes.

But they decide to explore the folklore and make a film in this ‘found footage’ docudrama directed by Bobcat Goldthwait (God Bless America). And it’s watchable enough: the pair are typical twenty-something dudes but there’s a feeling early on that this is re-visiting ‘Blair Witch Project’ territory as the vibe turns creepy once they reach a more isolated wooded location.  There’s one shot that seems to go on forever (20 minutes) and holds on to the pair’s bewildered expressions of abject terror as they contemplate the scene before them . Shame the ending is such a let down. MT