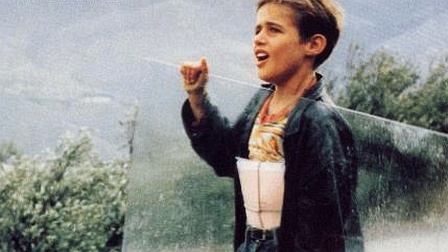 WILLOW AND WIND headlines a touring film season exploring and celebrating rare film classics about children “Cinema of Childhood”. The season launches this week with Mohammad-Ali Talebi’s film that poetically mirrors the political unrest in Iran at the beginning of this century and, in particular, the concerns surrounding artistic censorship.

A young schoolboy in a primary school in the Iranian mountains is threatened by his teacher with immediate expulsion, if he does not repair a broken window, which he smashed whilst playing football days ago. The boy’s father has no time or inclination to help him, and so he has to turn to his new friend, who has recently joined the class. Together they somehow manage to get the funds, but the glass merchant lives miles away from the school. Our hero stumbles with the big plate of glass through the wild landscape, but arrives with the window plane intact at his destination. Just when he seems to be successful against all odds, the gathering storm finally brings his odyssey to an unfortunate end.

Based on a script by Abbas Kiarostami, director Mohammad-Ali Talebi (Bag of Rice, 1998) has painted more than filmed this poem about loneliness in childhood. Ozu and Bresson immediately spring to mind, their fragile child characters in a world of insensitive adults are very much related to all the children in this film. But, surprisingly too, there are also echoes of early Hitchcock films, where children are the victims of the adult world. Talebi starts his discourse in poetic realism right at the beginning of the film, when the newcomer to the class, coming from an Iranian region where it hardly rains, is naturally more fascinated by the rain than the lesson. The weather plays a central role in the film, nearly always having a negative influence on the hero’s struggle. Adults are shown as  remote: even when they want to help, they are unable and sometimes unwilling to engage with the childrens’ problems. Modes of transport are archaic and unreliable, not helping the quest of the boy, which is thwarted at every turn. Talebi’s narrative, fraught with  incidents, is always second to his lyricism; dialogue is minimal and feels redundant, since the tortured look of the main character tells the story on his own. The howling wind and wild landscape is integrated beautifully, always playing a main role in the proceedings.

The camera is very mobile: panning and tracking vigorously, panoramic shots of the mountains are breathtaking. The young boys Razam and Kuchakpourso give convincing performances as they form a bond of friendship, their vigour contrasted (rightfully) with the adults, who seem either subdued or pedantic. Merhad Jenabi’s intense original score underlines the enfolding drama without intruding. Willow and Wind successful creates a world of childhood, full of passionate dreams and, at the same time, rejection by an adult world – the boy’s imagination – which drives him on, so much superior to the dreary world of the adults.  In this atmospheric mood piece, Talebi shows us, that in the process of growing up, we loose often much more than we gain. AS

HEADLINING the SEASON ‘THE CINEMA OF CHILDHOOD‘ AT THE FILMHOUSE EDINBURGH