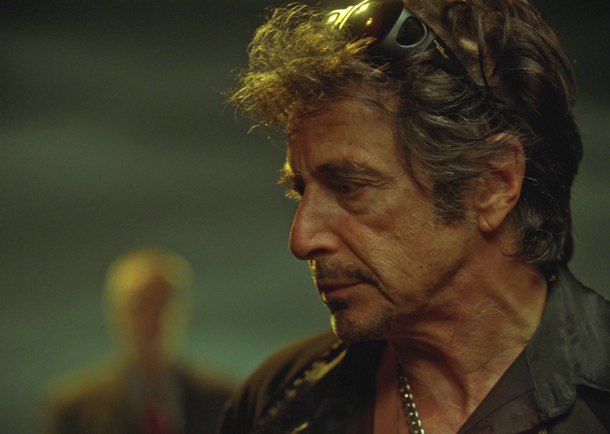 Fifteen years after “Looking for Richard”  Al Pacino is looking to become Oscar Wilde. Not literally, of course, (even though for a moment he asks rhetorically ‘imagine me as Oscar Wilde’), but this documentary is a work of passion and obsession. Starting from Estelle Parsons’ production of “Salome” at the Wadsworth Theatre in Los Angeles (filmed in five days) with Pacino as Herod, Jessica Chastain as Salome and Roxane Hart as Herodias, Pacino than gathers speed and travels to New York, Dublin, London and Paris, to interview the likes of Gore Vidal, Bono and Tom Stoppard – then back to his dressing room in LA, to discuss matters with his French DOP Benoit Delhomme.

The breathtaking tour de force somehow always features Al Pacino as centre stage, not always of his own making, as in a scene in Ireland when a fan of his draws him into a mock-duel straight out of Scarface. But others have their amusing parts too, like Gore Vidal venturing into discussing the merits of Wilde’s favourite lover. But Pacino always returns to Wilde’s play, showing us his other side: the consummate actor: full of lust, despair and torment – a little bit like the playwright himself.

Wilde wrote “Salome” in his early twenties, in his second language, French. It was often banned because the censors did not allow biblical figures represented on stage – at least not the bad ones. Merlin Holland, Wilde’s grandson, tells Pacino that his grandfather wrote this play before his coming-out as a homosexual, his marriage to Constance Holland not being the cover-up people suspect. “Salome” is mainly about a girl becoming a woman: Jessica Chastain’s Salome is all about sexual awakening, coupled with a lust for power, splitting the already fragile alliance of her mother and stepfather. Not forgetting her ruthless side, asking for the head of John the Baptist, because he did not want to kiss her. Ch

Chastain is the star of the show and, to Pacino’s credit, he lets her have the limelight, even though she is not allowed to say very much about the production. Pacino has filmed it as a combination of three different settings: a read-through at the LA theatre before an audience, a re-creation on the sound-stage and a third version (a mock De-Mille production) in the desert, with a different cast, bringing out the showman in Pacino. The latter fits well in an often satirical production, in spite of Pacino’s obvious honesty. But he can’t help going over the top sometimes with a reckless over-ambition and his entertaining rollercoaster production sometimes just misses the label of mockumentary. AS

OUT ON RELEASE AS SELECTED CINEMAS FROM 12 SEPTEMBER 2014