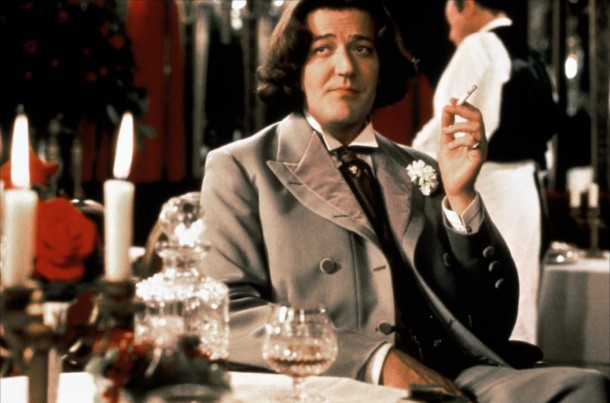 Brian Gilbert’s elegant Arts and Craft’s romp delicately unbuttons the sexual adventures of one of Ireland’s best known poets and playwrights who became a household name largely for his epigrams and novel: The Importance of Being Earnest.

The film opens as Wilde has returned from America and plans to marry a quietly pliant woman of breeding Constance Lloyd (played by Jennifer Ehle)  who “allows him an audience”. Soon after the birth of their first son, Wilde turns to homosexual lovers as he hopelessly juggles his writing commitments (like “a Nothern business man who has to keep an eye on his factory”) with those of his growing family. Then at the peak of his professional career as ‘Importance’ opened to rave reviews in 1895, Wilde was convicted of “gross indecency”, due to homosexuality being against the law, and he suffered a spectacular fall from grace which forced him to spend the remainder of his life behind bars and in emotional torment.

Gilbert’s cast is nothing short of masterful: apart from Fry, the standouts are Jude Law who plays his vain and petulantly impatient great love, Lord Alfred “Bosie” Douglas; Tom Wilkinson shines as Bosie’s dashingly witty but vengeful father, the Marquess of Queensbury, who furiously exclaims in a coruscating father and son tiff: “you’re nothing but a bum boy!” and Michael Sheen who plays his more discrete and companionable lover Robbie Ross.

Oscar Wilde’s downfall was largely due to his unwise move of suing the Marquess when he tried to defame him for sodomy and later was able to produce evidence from “rent boys” who testified that the Marquess was correct in describing Wilde as a ‘bugger’. At after scenes in court, Wilde lives out the rest of his life in less agreeable circumstances.

Stephen Fry is the shooting star of the piece giving a glowing performance that effortlessly reflects the poet’s appealing personality. As the first “modern man” he shines by cleverly managing the conflicting sides to his Wilde’s personal life, which he handled with consistent integrity, calm and dignity.  Despite all this, Wilde was sadly unable to win over the court and the final scenes are testament to Wilde’s deep philosophical understanding of the world around him.