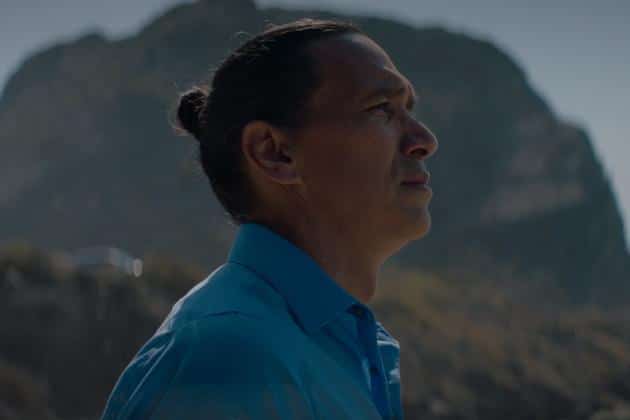 Native Americans justifiably have an axe to grind in these post colonial retribution times. Coming from this background himself, Lyle Mitchell Corbine certainly knows the territory. His feature debut, “Wild Indian,” captures the zeitgeist in a sober debut that opens with scenes of past glory where a proud warrior is seen brandishing a bow and arrow, but is sadly unable to deal with his traumatic past and male prowess in modern day America.

But let’s forget all the stuff about tomahawk spirit guides and dusky squaws bedecked in chamois leather. This is actually a classic female abuse drama couched in a Native American heritage drama. It sees a disenfranchised man called Michael taking his traumatic past out on women, then asking Jesus for mercy in a phoney act of confession .

We first meet Michael as Ojibwe teenager Makwa (Phoenix Wilson) with his best friend and cousin, Ted-O (Julian Gopal), living on a Midwest reservation. Makwa is clearly a troubled individual whether as a result of his upbringing or his heritage is never really explored in-depth. Messing about in the woods one day with Ted-O, Makwa comes across a former classmate who he shoots and kills, unable to reconcile a long held grievance from the past.. Ted-O is so shocked he actually helps his friend bury the body – something he will live to regret as the crime comes back to haunt him in later years.

Fast forward to 2019 and the pigtailed Mawka, now Michael (Greyeyes), is living in another part of the US and married to an ex dancer Greta (Kate Bosworth) with whom he has a son. Enjoying the uplift his heritage proffers him in the context of workplace diversity Michael enjoys all the perks of his job in a successful marketing company alongside colleague Jesse Eisenberg (who is also the film’s producer). Ted-do (Gopal), on the other hand, has just served time for a drugs-related offence and looks the epitome of a hard bitten criminal covered in tattoos. Despite attempts to ingratiate himself with his sister Cammy (Lisa Cromarty) and her five-year-old boy, he bizarrely decides to sleep outside in a tent, rather than in her house. His manual job in a restaurant is not something he is not proud of, but he clearly feels remorse for the woods incident and tries to make it up to the family of the boy Makwa killed, an episode that ends in tears.

Greyeyes gives a convincing performance as the hard-eyed Michael emerging a vicious bully where women are concerned, and they are forced to deal with the full brunt of his particularly toxic brand of machismo throughout this feature, Michael continuing to cause havoc, many years after killing his school friend in cold blood.

Corbine manages the two-stranded narrative well enough although there is not enough about Michael’s American heritage – details of which could have been fleshed out in flashbacks rather than a ‘before and after scenario’ that leaves us wondering whether his abusive childhood was not the only factor contributing towards his becoming a psychopath.

Instead, the thrust of this fraught psychological drama focuses on his everyday casual violence in the present day as he struggles with the perceived injustices of his background while outwardly presenting as a high-performing almost seductive   psychopath prone to visiting lap dancing venues where he asks one ‘hostess’ to indulge him in his predilection for choking.

Well performed by the ensemble cast – Greyeyes is really chilling in the central role – Wild Indian is a brave attempt to highlight the issues facing Native Americans in the present day, but sadly rather a lost opportunity because of its confusing narrative. MT