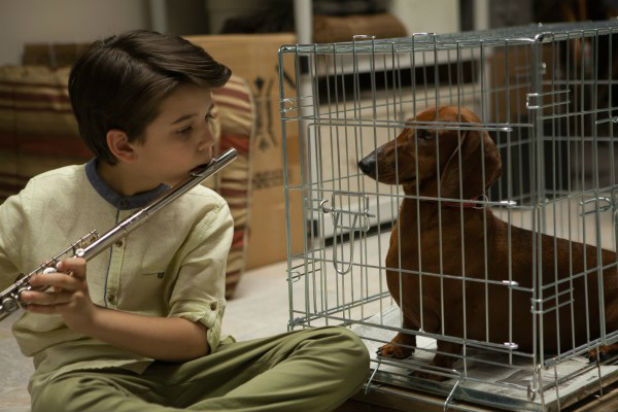 Todd Solondz is often seen as a divisive figure in the world of filmmaking where his dark comedies are often uncomfortable to watch despite their mordant humour and edgy subjects. His eighth feature, the intriguingly titled Wiener-Dog is no exception. For those of us who may wonder at this canine breed, it is a dachshund or more commonly known as the sausage dog. And this one is billed as no ordinary pet who ‘changes or inspires’ the lives of its various owners, who will possibly enrage you but certainly leave you dreadfully sad.

WIENER-DOG takes the form of a series of four vignettes featuring the dog in question whose peripatetic life leads him to a selection of owners – and not all appear to be animal lovers. We first meet the female dachshund languishing in a cage in a dog’s home, where her little paws are trying to find a comfortable spot to settle down. Bought by the father of a boy to help him on remission from cancer (Keaton Nigel Cooke), his mother Dina (Julie Delpy) takes an instant dislike to the pooch, emerging from her own childhood pet who was ‘raped’ by a dog called Mohammed, and has him speedily put down.

But Greta Gerwig’s veterinary nurse Dawn Wiener (the grown-up version of the shy girl in Welcome to the Dollhouse) takes pity on Wiener-Dog and nurses her back to life before embarking on a weird weekend with an ex-classmate she meets while shopping. Leaving the pup with her friend’s Down Syndrome brother and his wife, Wiener-Dog ends up with Danny DeVito’s professor of film studies who is despairing of his lacklustre students. Clearly Solondz brings his personal feelings into this caustic satire: he dislikes dogs, and doesn’t think much of modern day Hollywood or even men called Mohammed…go figure.

But the closing chapter really takes the dog biscuit when it comes to cruelty, in an hilarious segment involving a bitter old woman (a superb Ellen Burstyn) who re-names the dog ‘Cancer’ and reminisces over her mispent youth. Beautifully filmed by award-winning DoP Ed Lachman (Carol) WIENER-DOG is an acquired taste – enjoyable enough but with an ending that is the worst nightmare for any self-respecting dog lover. You have been warned. MT