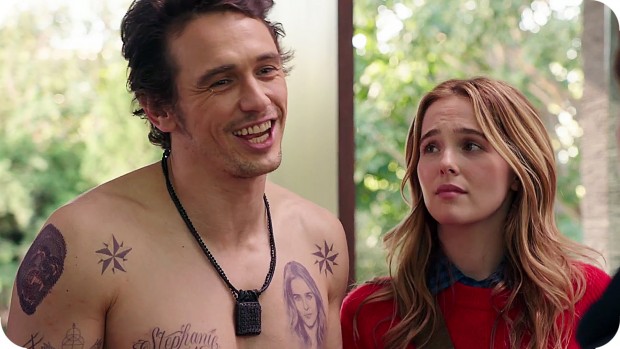 WHY HIM? is just another chapter in the Meet the Parents saga, and director/co-writer John Hamburg tries very hard to succeed, forgetting that the success of any Rom-Com is measured by its light touch. But instead of a soufflé up comes a stodgy brew of clichés and didactic, overlong scenes, ramming home his points, afraid that the audience needs permanent reminders when to laugh.

From the sticks of their Ohio home the three Flemings – father Ned (Cranston), mother Barb (Mullally) and teenage son Scottie (Gluck) – set out to visit daughter Stephanie (Deutsch) in California for Christmas, where they hope, that the future son-in-law Laird (Franco), will make a better impression in person than in their introductory, rather disastrous Skype session. But Laird is even worse in person: a rich young man, worth all of 193 million bucks, he runs a high-tech labour in his futuristic house, where he insists on a strict New Age lifestyle, including a paper free environment, including the bathrooms. Since he is also fond of including at least two swear words in one sentence, a combative confrontation with Ned is guaranteed: apart from the normal Electra obsession with his sex-loving daughter, his printing business in Ohio is going bankrupt. Laird’s side-kick, Gustav, speaking with a very fake German accent, attacks his master violently at will, keeping him alert to any danger; prompting Ned to compare their relationship with the one between Closeau and Cato in the Pink Panther films – a symbol for Hamburg’s heavy-handed approach. Needless to say, the two males – mistaking their diverse obnoxiousness for candour – will end up in a brawl themselves, shattering the glass case in which an elk is preserved in his own urine, in the process. But fear not, the landing is very safe indeed.

Trying hard in every aspect –wanting to be funny, daring and original – WHY HIM somehow manages to be neither. To start with, Deutsch’ character is dreadfully under-developed. She is just an object for the men to fight over, and even though Stephanie rebels initially, she eventually finds her place in a united family business, featuring orgasm-inducing toilet water works, instead of ordinary loo paper. Her mother Barb is just an appendix to her husband, reminiscing about the past and moaning about a lack of sex. Yes, there are some funny ideas, but even the best suffer from Hamburg’s inclination not to cut any scene, before it has run its length – and more. The result is a near two-hour running time, including a rather sad appearance of two members of Mom’s and Pop’s favourite band Kiss, and Barb’s equally misplaced attempt of rivalling her daughter, when admitting to a ”hand-job for Ned” after the young couple had attended a concert of their favourite quartet. AS

OUT ON GENERAL RELEASE FROM BOXING DAY 2016