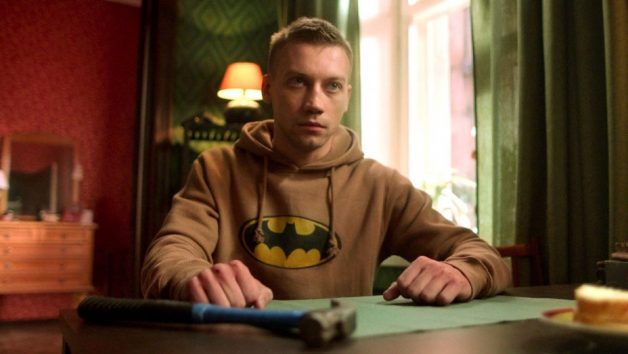 Russian director Kirill Sokolov’s debut feature is a bloody-spattered, neon-infused cocktail of toxic manhood tinged with bitter comedy that sees a war of attrition play out between a meat-headed bellicose gangster and his daughter’s wiry and wilful boyfriend.

Set almost entirely within the confines of a pokey Moscow apartment, this luridly gory genre piece makes a striking showcase for the 29 year old Russian filmmaker’s nascent talents, eking out a shoestring budget to remarkable effect. A lively inventive script elevates the film’s pulp credentials with some shocking social commentary on Putin’s Russia and an illuminating take on today’s Russian womanhood. Resonances with Tarantino are clear from the outset. But this first film is slick and surprisingly confident, its turbulent tension primped by a perky score from Vadim QP and Sergey Solovyov.

Twentysomething Matvei (Aleksandr Kuznetsov) is feeling a little back-footed when he fetches up at the family home of his girlfriend Olya (Evgeniya Kregzhde), armed with a hammer and an assignment to murder her detective dad Andrei (Vitaliy Khaev). Clearly the old bruiser is no pushover, but strangely neither is the lithely ‘up for it’ Matvei. A wrestling match soon turns nasty and the mayhem sees Matvei’s face embedded in a TV screen, luckily it’s switched off.

In the thick of the fight, Sokolov cuts to threefold flashbacks filling in the backstories on Matvei, Olya and Andrei’s police partner Evgenie (Mikhail Gorevoy). The showdown in the apartment is rooted in an earlier blackmail pact between the crooked cops, which released a killer from prison but ended in tears all round. As the tangled threads of skulduggery come to light, friends and family turn against each other and the mounting body count becomes a bloodbath.

This is a hyper violent affair that may prove too much for many with its ludicrous fight scenes, Sokolov ramping up the butchery while maintaining a sardonic upbeat tone that sees the good, the bad and the ugly bite the dust – women included. Although it must be said that the bad get their just deserves in a pitiless payback scenario.

Why Don’t You Just Die! can and will be read as a caustic commentary on Putin’s rotten Russia, but Sokolov certainly makes a meal of it all – cashing in on his opportunity to put the boot in, big time. The film’s original title translates as Daddy, Die! hich and Sokolov emerges as a refreshing and raucous new talent on the Russian indie film scene. MT