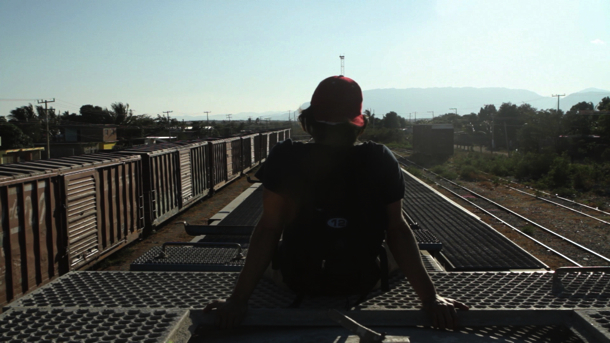 In August 2010 a male body was discovered in the Sonora desert in Arizona. No clues to the identity of the corpse were found, apart from the name “Dayani Cristal” tattooed across the chest. It became soon clear, that “Dayani Crystal” is one victim of over two thousand would-be immigrants found dead in Southern Arizona in the last ten years, after the 389 miles “Border Wall” between Arizona and Mexico was erected. The total length of the Wall between the two countries is over 650 miles, the loss of life is calculated of over 5000 people in the last ten years alone. The USA government has so far spent billions of Dollars on the wall, with maintenance costs accumulating.

Marc Silver avoids a purely documentary structure and after showing the work of the Tucson police department in identifying the corpse and the joint efforts of the Honduran consulate, he makes the actor Gael Garcia Bernal as “Dayani Cristal” the focal point of this moving docudrama, tracing the steps of the dead man’s journey from a little village in Honduras. We learn that he was married with three children, once stricken with leukaemia, which explained the debts the family had, and motivated the husband to emigrate. The journey through Mexico, mainly by foot and train, is hazardous, border police and kidnappers feast on the victims. In the end, we learn the identity of the victim: Dilcy Yohan Sandres Martinez, father of a baby girl named Dayani Cristal. He was 29 when he died twenty minutes away from Tucson, begging his friends to leave him die alone in the freezing desert, so as not to endanger their own lives. Unlike others, whose identity is never discovered, he at least found a sort of peace: his body is flown to Honduras, his burial attended by his family and friends.

In putting a face to victim, the film personalises the argument in a positive and a negative way: the brilliant acting of Bernal makes us identify much more with the character of Martinez than would have been the case in a pure documentary film. At the same time, this personalisation (and yes, sometimes sentimentality creeps in with much wailing and gnashing of teeth), occasionally detracts from the overriding conflict, even though the straight documentary passages of the film speak for themselves and are enforced repetitively.  In the end, the main argument is made by an American: Since it is proven, that (not only) the USA economy relies on low paid workers to do the jobs other Americans don’t want to do; would it not be more sane to invest in a proper immigration system, instead of this frontier of death. After all, weren’t we told that the Berlin Wall signified the superiority of capitalism over Communism? AS