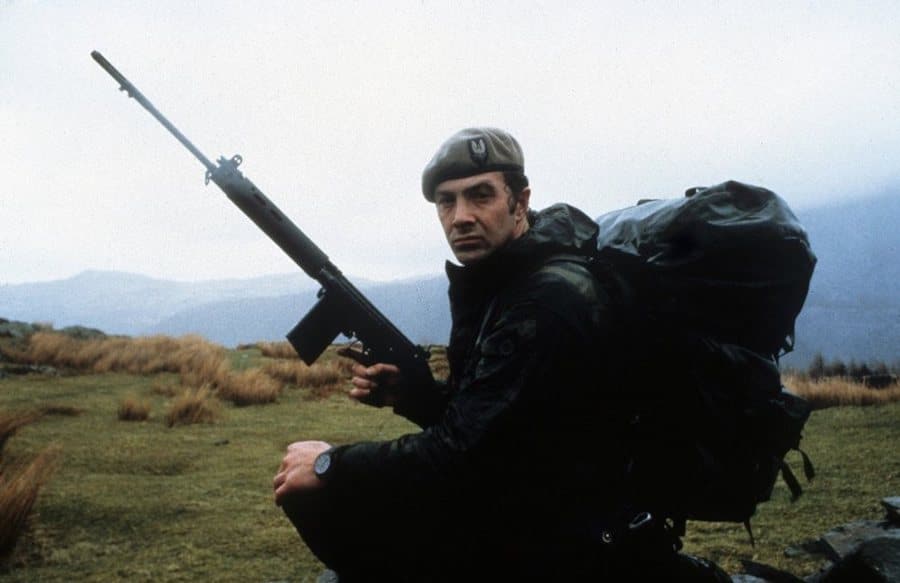 Interviewed on the set, Lewis Collins said the situation depicted was ambivalent since although his character deplored the terrorists’ methods he sympathised with their aims. The film itself naturally displays no such nuance; and the late Philip French described it at the time as the most ludicrous political picture he’d seen since the Boultings’ ‘High Treason’ over thirty years earlier. (An apt comparison, although the earlier production was plainly a much better film.)

After the Iranian Embassy Siege, Collins – always the less introspective half of ‘The Professionals’ – was quickly snapped up by producer Euan Lloyd for the lead for this fascinating document of the mood that prevailed in Britain during the bleak winter of 1982 between the Toxteth riots and the war in the Falkland Islands that reunites the writer and one of the stars of ’12 Angry Men’.

No such film would of course be complete without a voluptuous female psycho from Europe with an itchy trigger finger (played by Ingrid Pitt in fatigues), and despite being idyllically married to a wife in Laura Ashley (played by Lloyd’s daughter Rosalind) big-haired Judy Davis says Collins makes love like he “just got out of prison” while her glowering entourage of lefty malcontents look on enviously. (Since they have to to get their hair cut and be smartened up to impersonate a military band a fascinating scene that didn’t make the final cut must have been Ms Davis impatiently showing her confederates the correct way to do up their bow ties.) @RichardChatten