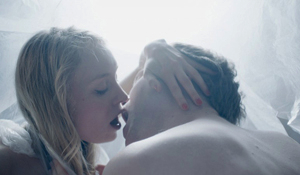 Grzegorz Muskala’s debut film DIE FRAU HINTER DER WAND (WHISPERS BEHIND THE WALL) has echoes of Tom Tykwer’s first film The Deathly Maria and it is no accident that it was commissioned by the same TV broadcaster (ZDF). The story is a mixture of suspense and horror: when Martin, a law student, arrives in Berlin, he can’t find a flat, until a ‘helpful’ caretaker helps him out with a run-down apartment, whose last tenant, Robert, has disappeared. When Martin visits his landlady, the attractive sculptress Simone, who happens to live next door, she seduces him. Soon Martin becomes obsessed with her, since he can see from his window into the flat of the pianist Sebastian, whose lover Simone is. Observing the two, Martin forgets his studies, and when a hallucinating Robert suddenly appears, Martin starts to believe that Simone is up to no good. But his lust wins out, and even an ugly confrontation with Sebastian, who is on his way to Cape Town, does not stop him from pursuing the object of his obsession. When Sebastian has eventually departed to South Africa, Martin believes that his dream has come true, until he takes a closer look at Simone’s latest work of art. Whilst the narrative is not very original, Muskala (like Tykwer), takes great care with the aesthetics, not very common in contemporary  in German cinema: the rooms seem to shrink, the light is diffuse and threatening objects pop up all over the place. Borrowing from Dario Argento as well, Muskala skilfully confuses the audience, always mixing imagination and reality, not letting on if Martin is imagining everything. Perpetrator and victim are only revealed in a rather bloody ending. Whilst one should not be carried away, Muskala is an exception in today’s German film landscape, dominated by a pedestrian, didactic approach and lack of imagination.

Screening during the EEFF 24.6. Hackney Picture House, 18.30)  For all our coverage follow the link