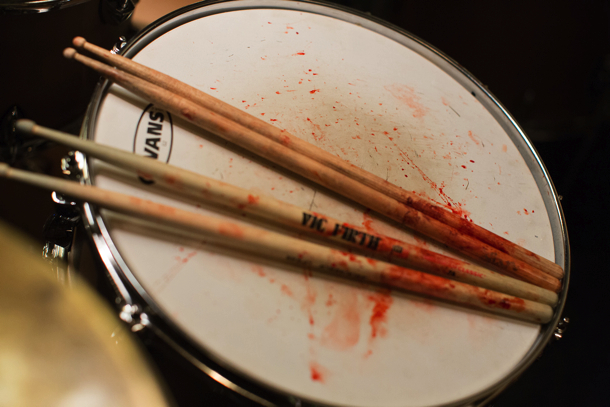 Writer/director Damien Chazelle’s WHIPLASH is an mutually shrill and testosterone-loaded duel between student and teacher. Set in a music academy, it features music and its creative process as a ridiculous display of male chauvinism. Fast-paced, but only to camouflage its utter emptiness; it is difficult to imagine any film that takes itself seriously to be more bereft of critical or analytical thought process: it is simply a battle between ‘Neanderthals’. But then, Chazelle did hone his craft as a writer on the horror-exploit The last Exorcism Part II only last year.

Andrew Neyman (Teller) is a jazz percussionist at Schaeffer Music Academy, where he falls victim to the conductor/teacher Terence Fletcher (Simmons). For reasons only known to himself, Fletcher decides that Andrew is a genius, who just needs a ‘harsh hand’ to realise his potential. Most of the time Fletcher shouts obscenities, mainly the f-word and a collection of sexist and homophobic curses. Sometimes Andrew has to fight with two rivals for his job with the orchestra (they rotate after only a few notes) before the master shows his dissatisfaction by replacing them. Andrew is as frightened as he is impressed, and when he is late for a public concert after colliding with a lorry, he still manages to play, bleeding from a head wound – even though he faints after a few notes. He breaks up with his girlfriend, Nicole (Benoist), callously telling her she would be in the way of his career. Finally, after hearing that one of Fletcher’s students has committed suicide due to the bullying tactics of the teacher, Andrew signs (an anonymous) complaint, and Fletcher gets fired. But a chance encounter at a concert leads to a final showdown between the two…

Needless to say, this narrative has little in common with life in real music academies. But that seems to beside the point for Chazelle, who goes for tempo and countless jump cuts, giving WHIPLASH an odd retro-feeling. The camera moves in circles, rapid close-ups show the verbal exchanges. The acting is full of bravado, but cannot compensate for the underlying ideology, best described as unremitting male chauvinism – we are learning nothing about Fletcher’s private life, and therefore none of his motivations for his cruelty. But WHIPLASH declares simply that in order to succeed we have to suspend all moral scruples. This way, male intransigence triumphs, leading to the concept that only professional success counts, and that Andrew’s private life must be sacrificed for “his” success.

Not that Chazelle’s chauvinist philosophy is anything new. Ayn Rand (1905-1982), a novelist turned politician (her novel The Fountainhead was adapted for the screen and starred Gary Cooper) founded the school of “Objectivism” in the early 50s. A supporter of neo-conservatism, like Barry Goldwater, she adopted the maxim “the concept of man as a heroic being, with his own happiness as the moral purpose of his life”. She rejected the existence of instinct, intuition, religion and revelation and postulated, that “the individual should exist for his own sake”. Finally, she declared, that “egoism is a virtue of selfishness”. We can assume, that Chazelle read Rand at Harvard. AS