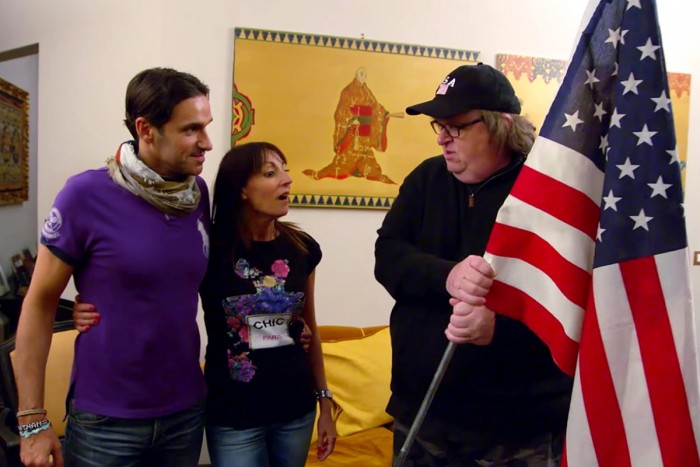 Oscar-winning documentarian Michael Moore is a romantic idealist. Well that is what emerges from his latest film, a joyful and impishly entertaining romp around Europe which explores a simple premise: why are Americans so hard done by in the country that invented the American Dream? Subversively simplistic but wonderful to watch, WHERE TO INVADE NEXT cherry picks the best European ideas to import back to Moore’s motherland.

In Italy he discovers the love and appreciation of food and sex: Italian workers get 2 hour lunch breaks and two week’s paid honeymoon entitlement, in addition to the other regular seven; from France Moore selects kiddies’ four-course school meals – at least one is a regional cheese selection. In Finland he discovers that children get no homework and are encouraged to have fun during their schooling; so that’s the next idea to pack in his return bag; in Slovenia University is free to any student, so Moore stashes that in his suitcase to take home; and Iceland gives women the upper hand in the workplace and politics, so what’s not to like about that in America.

Judiciously, he forgets to visit Britain; that would be too complicated. But the mere fact that Iceland, Slovenia and Finland have tiny populations is another vital fact Moore fails to factor in when looking at the these countries’ standard of living. Italy has always been a nation of small family businesses whose customers value quality and style way above price – the British prefer the cheapness of Primark (go figure) – and no mention is made of the raging unemployment in Italy.  France is first and foremost in promoting the interests of his native (white) citizens (thanks to Citoyen Chauvin) so never mind the rest. And unless you’re wealthy in America, living there pretty much sucks in terms of holiday-entitlement, prisons and social welfare. And nearly 60% of their pay-packet deductions go to an ominous thing called ‘defence’.

There is an hilarious scene early on in the film where the ‘US Powers that be’ – Heads of Government and the Forces – go to Moore cap in hand asking for his assistance. And Moore is spectacularly good at his punchy interview technique of firing fast and furious questions, that makes Louis Theroux look like a shrinking violet in comparison. We watch in amazement as a svelte and hyper-tanned Italian couple blanch and wither to hear that Americans only get two weeks holiday – paid if they’re lucky!.

But clearly a visit to Norway’s worst prison is always going to be a picnic in contrast to a Texas penitentiary: the population size and ethnic mix is the US is beyond comparison. And when rich and poor kids all attend the same small local school and grow up in the same community, naturally this fosters good relationships across the social divide: “We have to show love and affection for one another”. Certainly when fewer people live side by side in near empty cities, there is much more room for tolerance and respect. This ‘grass is always greener’ approach is a bitter pill for most Americans to  lot of American audiences rueful when they see what is on offer in Europe. And the film many British people think twice when voting ‘Brexit’ at the forthcoming elections.  MT