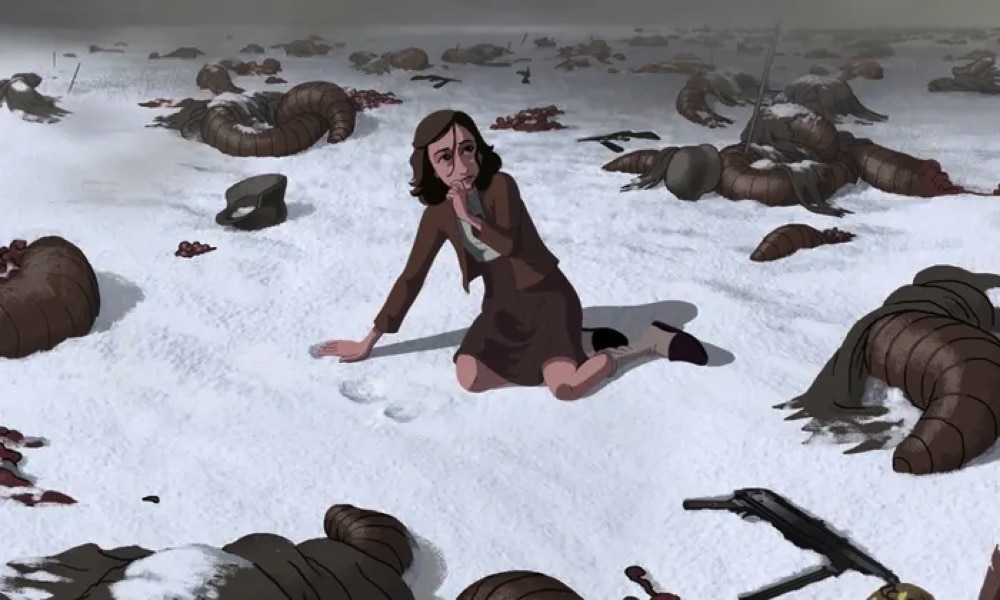 On a dark stormy night in Amsterdam a red-haired beauty breaks into the city’s Holocaust Museum and steals a diary from a crystal showcase. The woman is Kitty and the daybook belonged to the famous woman who created it, Annelies Marie Frank (1929-45).

Ari Folman’s latest animation is a playfully evocative take on the tragedy of Anne Frank (Emily Carey) whose final months are reflected through the eyes of her gadabout muse and confidante Kitty, vividly brought to life here by Ruby Stokes. Bristling with ideas that buzz around like fireflies in the vibrantly rendered animations, this clever imagined drama offers a slice of European social and political history pulsing to an upbeat syncopated score, but doom is never far away.

Ink spots on the diary implode to expose episodes of Anne’s daily life before and after her Jewish family’s confinement in the Amsterdam attic, Folman reveals a tense and introspective young daddy’s girl (her father Otto was the sole survivor) escaping into her imagination, pushed away by an unloving mother, an envious elder sister (Margot) and a collection of unsuitable boyfriends in the shape of Herman Kupman and Rob Cohen, growing up in wartime Amsterdam. Finally she settles for the gentle unassuming hypochondriac Peter van Daan, thoughtfully voiced by Sebastian Croft.

In the present day, Kitty comes alive as an inquiring young ‘girl about town’ desperate to find out what happened to her creator, who disappeared nearly eighty years ago. Gradually the past and present collide through a kaleidoscope of comic and tragic touchstones: flashbacks to Anne’s final birthday with a cake and bottle of ‘4711’ cologne; Nazi troops marching into the city as supersized Darth Vader monsters shrouded in black; the ‘Occupy Europe’ era. The current immigration crisis shoehorned in as a pivotal plot twist is inspired, but somehow a step too far.

More convincing is the film’s ‘cancel culture’ theme that sees the wan and prickly teenage Anne confessing to missing the cinema as she huddles with her family in their attic hideout while the Nazis set fire to the city, banning Jews from everywhere in the ensuing mayhem. Her dream that Clark Gable will scoop her up on a white charger and save her from the macabre encroaching enemy feels real and poignant with its nod to the pandemic.

In their hideout the Frank family are joined by the genteel Van Daans. This allows Folman to make some amusing observations about living in close quarters with strangers: how do you cope with flatulence when your diet consists largely of cabbage? Then there’s the well-worn  hypochondria theme seen through Peter’s penchant for staying in bed all day feigning illness.

After Anne’s ‘disappearance’ Kitty files a ‘missing person’s report’ and meets little Ava who has managed to enter Europe by boat courtesy of her sailor father. The police are ever vigilant, one officer has an Israeli accent, but the shadow of the death camps darkens the film’s final segment in haunting widescreen animations picturing trains travelling East to Westerbork transit camp where Anne and her mother are briefly united before she goes with Margot to Bergen Belsen and beyond.

There is a romantic scene towards the end that captures Anne and Peter kissing under a frosty star-strewn sky, set to Chopin’s Piano Etude #3 In E. this is the loveliest memory of a film that occasionally dazzles with its trove of thoughts and memories of a terrible time in history when Europe was divided as it is, once again, today. MT