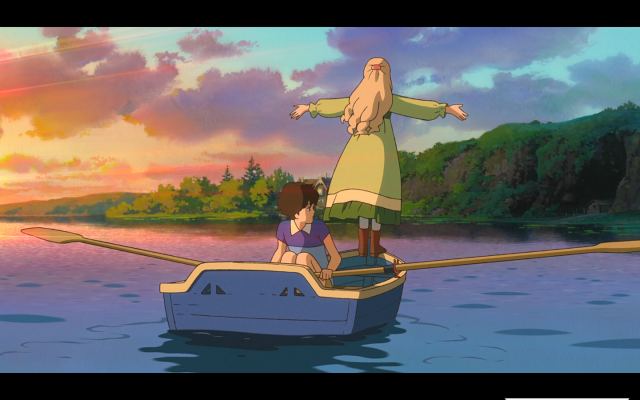 If this is really the last film of Studio Ghibli as rumoured, Hirosama Yonebayashi’s adaption of Joan G. Robinson’s 1967 YA novel, is a worthy epitaph to a series of breathtaking re-inventions of the Animation genre that have given us all a break from the onslaught of bombastic CGI Mega blockbusters.

Successfully adapted and transferred from the original Norfolk setting to Japan, by a writing team incluing the director and David Freedman (The Magic Snowflake), When Marnie was There is a poignant study of teenage alienation and displacement. Anna (Takatsuki), a withdrawn tomboy, lives in Sapporo with her foster parents. Having found out that her guardians receive state money to look after here, she becomes even more introspective, confessing that she hates herself. Anna suffers from asthma and she is sent to the island of Hokkaido in North Japan to live her foster mother’s grandparents during the summer holidays. But even in these peaceful surroundings, Anna cannot settle down and when an overweight woman comments on her blue eyes (a rarity in Japan), Anna angrily calls her a “fat cow”.

Then during a painting trip in the countryside, she stumbles upon an old villa at the shore of a lake, where a young blond girl, Marnie (Arimura) lives. Only a few ears older than Anna, Marnie seems to be nocturnal enjoying the time when her parents give sumptuous parties, which Anna watches in amazement. At first we believe that Marnie  is an imaginary friend, conjured up by Anna to combat her loneliness, but rather traumatic scenes in a nearby haunted windmill slowly lead to revelations which explain Anna’s life before her adoption.

The old-fashioned, but delicate rendered images give the film a timeless appeal. The girls’ friendship is never cloying because their interactions and long conversations are the bond of their mutual affection. As we will find out, their displacements are interwoven in the past. The emotional world of the narrative feels very feminine (all males characters are peripheral) and is faithful to the novel, where dream world and reality have to be balanced but not without a long, introspective struggle where identity is found in the past. This approach is hardly surprising, since Ghibli’s famous star, director Isao Takahata, created an animated version of yet another YA classic, Anne of Green Gables (written by L.M. Montgomery) in 1981. A wonderfully light, but nevertheless elegiac piano soundtrack by Takatsugu Muramatsu underlines the haunting and mysterious longing of a narrative, which creates a dream world of nostalgia, wonder and allure. If When Marnie was There, is really the last Ghibli production, the loss would be irreplaceable. AS