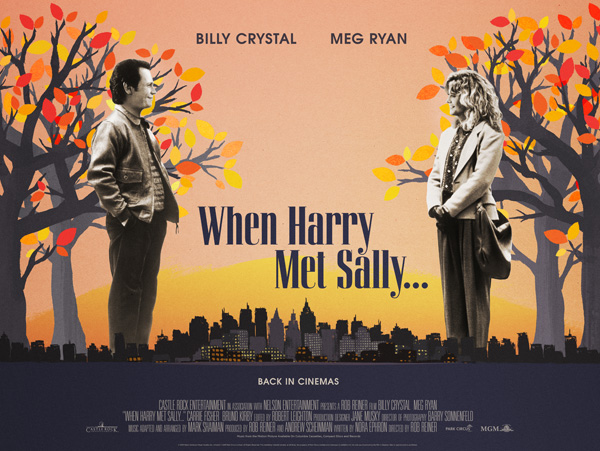 Often described as “Woody Allen light”, Rob Reiner’s WHEN HARRY MET SALLY, has aged well and cements its place as a quintessential feel-good romantic comedy of the late 80s. This is mainly due to the the chemistry between the leads Billy Crystal and Meg Ryan, but even more so because of Nora Ephron’s script, which was the result of interviews between her and Reiner as well as producer Andy Scheinmann between 1984 and 1988.

What emerges fro the interviews was that Reiner was permanently depressed, his sardonic humour saving him from becoming morbid. When Billy Crystal (who was at that time Reiner’s best friend) joined the production, he witnessed Reiner’s despair after his divorce from the actress/filmmaker Penny Marshall. The Sally identity was a mix of Ephron’s own relationship experiences and the ones of her girl friends.

The nods to Allen are clear: there is the use of the split-screen (when Harry and Sally phone in bed, watching their TV sets), and the Manhattan references are clearly visible. During the pre-production time, Ephron would interview people who worked for the company about their relationships, these interviews were shown in stylised interludes in the film. Regarding the end, Ephron and Reiner realised that the most realistic outcome would be the permanent status quo of friendship between the couple, but they chose a more optimistic finale.

Harry (Crystal) and Sally (Ryan) meet after graduation on the campus of Chicago University in 1977, to drive off together to New York, where he starts his career as political adviser, she as a journalist. Having witnessed Harry’s long, passionate goodbye from her friend Amanda, Sally is annoyed that he immediately makes a pass at her. They argue, non-stop, and Sally is relieved to see the last of Harry, when they arrive in NY, even though he is the only person she knows in the whole city. Five years later, they meet by accident in an NY airport, both having relationships, their rather frosty relationship continues. In 1987 they bump into each other in a bookshop, both their relationships have ended, and they start a sort of friendship, even though Harry still insists that a platonic friendship between a woman and a man is impossible, because the man’s craving for sex would interfere. At the famous scene in Katz’ Deli in Manhattan, Sally stimulates an orgasm, to prove a point to the still rather misogynist Harry. After meeting with their respective best friends, Marie (Fisher) and Jess (Kirby), to end their single status, Harry and Sally watch, as the two run off together, blissful in love. After a one-night stand with Harry, when Sally breaks down after her ex-boyfriend marries another woman, the couple have a vicious argument at Marie’s and Jess’ wedding reception.

Reiner recalls, that at a test screening, all the women in the audience laughed at the Deli scene, whilst the men were dead silent. The director’s mother, Estelle, had a small part in the film, as the woman sitting next to Sally in Katz’, ordering “the same as she had” from the waiter. Even today, there is still a sign above the famous table, saying “where Harry met Sally…hope you have what she had.”
Twenty-six years later two elements stand out: there is the shock to see a world without mobiles, as well as a very basic, noisy computer, and the emotional intensity of the couple, which still reverberates today, in spite of the rather light weight narrative. AS