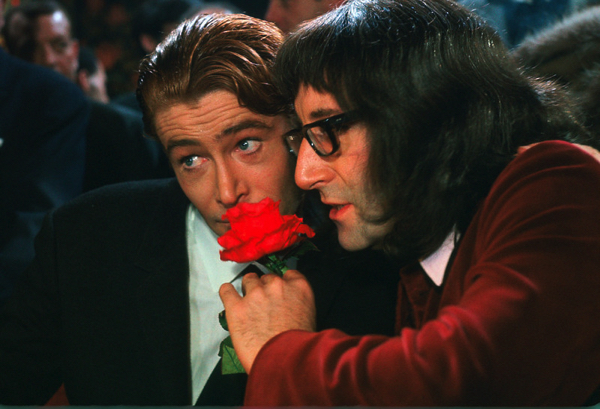 What’s new Pussycat? Is a light-hearted often hilarious comedy farce thanks to a witty script by Woody Allen (who also stars) and its fabulous cast. Nowadays it will be criticised for its perceived misogyny, but back in the 1960s this is how life was. So the film is certainly not laudable ethically or aesthetically but that doesn’t mean it’s not highly entertaining, and not least because of its performances and jazzy score from Burt Bacharach.

The opening sequence sets the tone for what is a flagrant but lush satire and outlandish behaviour from both the sexes, and everyone seems to play by the same rules, the men never upstaging the women.

Clive Donner would eventually go on to direct Peter O’Toole in Rogue Male (1976). Here he plays Michael Voltaire James, a rogue of a different kind. One who is dating Romy Schneider’s “Pussycat” but is giving out clear signals that he doesn’t want to be tied down. “Marriage is forever, like concrete”. The other women is his life enjoy his attentions but are never degraded or hurt by him.

So off he goes to seek the advice of Peter Sellers’ dementedly camp psychoanalyst who is himself not exactly averse to the odd extramarital affair, causing his wife (Eddra Gale) to inquire: “is she prettier than me? “Prettier than you?”, he replies “I’m prettier than you”.

Donner’s skilful direction plays down some of the film’s more slapstick sequences but still allows his prodigious cast free reign to style their own idiosyncratic roles, and this makes for some inspired and enjoyable vignettes from the likes of Capucine, Paul Prentiss, Romy Schneider, Ursula Andress, and Sabine Sun, although Peter Sellers shouts far too much for everyone’s enjoyment. Peter O’Toole is incredibly debonair as the philandering chain-smoking lead character who never seems able to curtail his romantic attentions.

Pussycat does have a happy ending and and brilliant finale – and Allen’s script provides plenty of memorable one-liners to make this a cult classic worthy revisiting. MT