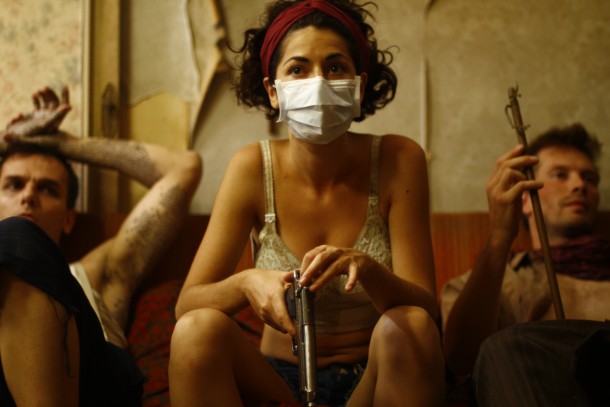 In this atmospheric mood piece, filmed mostly in close-up, Axel, Jonathan and Ana are survivors of some dreadful apocalypse which has made them desperate prisoners in a stiflingly uncomfortable internal bunker. Pasty and exhausted, they wallow in a feeling of overwhelming heat. Outside, an unimaginable Hell exists, experienced only by sounds of indiscriminate buzzing, distant cries and gunfire, suggesting warfare in a continuous present. Occasionally venturing outside to forage for subsistence, inside becomes a worse Hell: Holed up at close proximity they run through a range of human emotions: loathing, love, fear and mistrust, but they are forced to tolerate one another, making impromptu ‘confessions’ into a recording machine and watching TV on a small device as they slowly lose their minds. Gradually the enemy outside becomes the enemy within. For some inexplicable reason, they have captured one of the ‘undead’, a masked, traumatised zombie-like man who stares into space and refuses to comply with their efforts to communicate. Although Behr is successful in evoking a mood of ambient claustrophobia, this well-performed three-hander outstays its welcome after the first hour of its 98 minute running time, failing to compel or engage our interest beyond the initial scenario. John Paul Sartre’s 1944 play ‘Huis Clos’ springs to mind here, particularly Sartre’s expression “Hell is other People” expressing our daily struggle of being forced to see ourselves as an object in the world of another consciousness.

Christoph Behl is a German director who learnt his trade in Buenos Aires. He won a SILVER BEAR at Berlinale in 2004 for his short PUBLIC/PRIVATE. MT