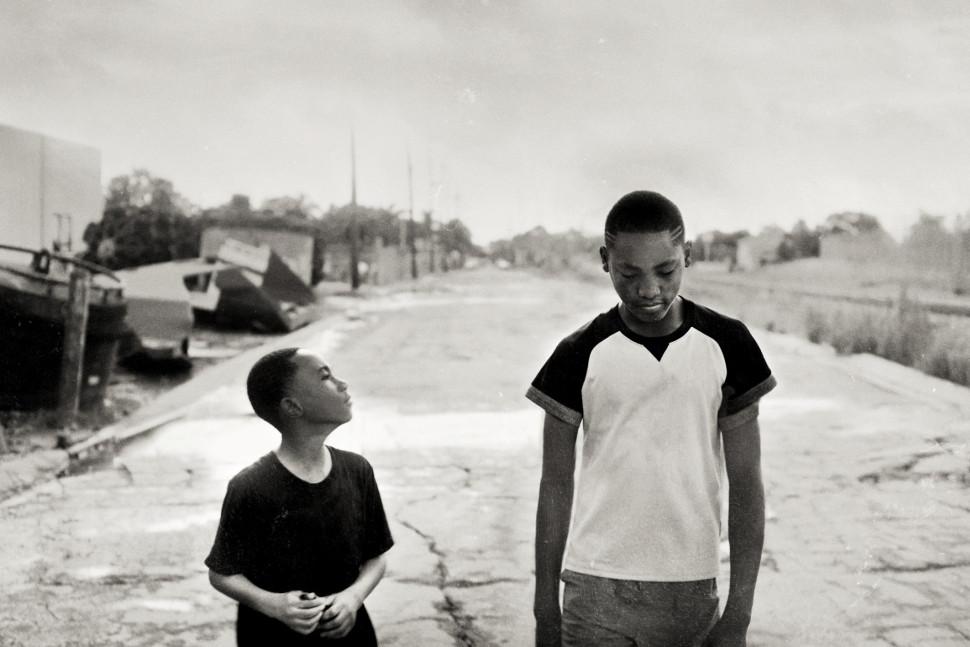 Black lives matter. And the point is brought home again in Roberto Minervini’s new film that has raw urgency to its desperate title and glows under Diego Romero’s stunning black and white photography. For years, Minervini has made it his business to portrait the poor and disenfranchised in searingly honest documentaries such as Low Tide, The Other Side and now this meditation of the state of race in the Southern US during 2017.

What You Gonna Do When the World’s On Fire?, explores the poverty-stricken black communities of New Orleans through three groups of people preparing for the annual Mardi Gras. Their songs and dances serve as the film’s only soundtrack sending out a proud message to the outside world that they will overcome racism in a nation that doesn’t care.

We first meet brothers, Ronaldo (14) and Titus (9) wandering along the empty road, at a loose end. Titus has clearly been spooked by a haunted house street attraction that echos the real and ever present danger of shotgun crime, a daily occurrence in the neighbourhood. Ronaldo likes to pull rank on his kid brother by teaching him to box. He also tells him that soon he’ll be shooting ‘just like his older brother’. Ronaldo is keen to see his father who is in prison, but due for release. The two may not have long together before his father returns once again. Meanwhile, their mother oversees their school homework and warns them to be back home before nightfall. The kids are still too young to have violence in their lives, but it won’t be long before it happens.

Judy is a philanthropic member of the community, a proud bar-owner in her early fifties who seems to have her act together, despite her difficult childhood. But making ends meet is another daily chore and her elderly mother Dorothy faces eviction due to the gentrification of the area, making housing much in demand. Judy is close to her cousin Michael and tries to help him as much as she can, she even tries to help some local crack addicts to kick their habit, but after talking to them she starts to empathise with their stories of abuse.

Meanwhile, Krystal Muhammad, who chairs the New Black Panther Party for Self Defence, is trying to make an active difference with her food parcels delivered to the local homeless. Along with her colleagues she demonstrates in support of police shootings of black men in the area that culminated in one of them being beheaded and burnt. Softly but surely they march in the street chanting: “Black Power” – and although this seems slightly cliched, their conviction is quietly affecting. Minervini presents a resonant and contextualised picture of a black community in turmoil – bloodied but unbowed, bound by their music, strong beliefs and traditions to fight another day. MT.

From 10 May, streaming portal DAFilms will present a curated selection of Roberto Minervini’s films: Gonna Dig a Hole to Put the Devil in. The tribute features Low Tide, Stop the Pounding Heart, and The Other Side. In all three titles, Minervini captured the stories of often overlooked people living on the fringes of society. Serving as supplementary material to this special film programme will be an exclusive DAFilms live stream discussion between the director himself and Artistic Director of the renowned Locarno Film Festival, Giona Nazzaro.

The discussion can be watched on DAFilms Live or on Facebook from Wednesday, 19 May from 7pm CET.