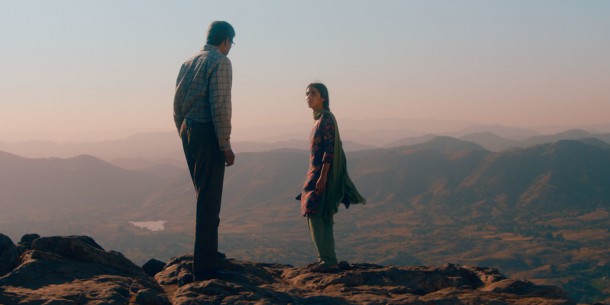 Actor/director Iram Haq’s impressive sophomore title WHAT WILL PEOPLE SAY plays out as a grippingly atmospheric thriller in which a beautiful young Pakistani girl plays the enigmatic and wilful heroine. Screening as a world premiere at this year’s Toronto, it offers refreshing and intriguing take on what could otherwise have been just another story about cross cultural conflict and tragedy or even wander down a fashionable politically correct route.

Nisha (Maria Mozhdah) is leading a double life — at home she is obedient to her traditional Pakistani father – played masterfully here by Adil Hussain (Lunchbox) – but to her friends she is a typical Norwegian teenager, hanging out in bars, dating and spending her time on her phone. But her father catches her flirting with a boyfriend upstairs in the family home one day and brings her world crashing down in a fit of anger, brutally disassociating himself from her behaviour, and taking her off to his family in Pakistan (the locations are actually India).

Haq makes great use of an atmospheric soundtrack to telegraph doom and despair in this often sinister story which makes great use of its snowbound and exotic locations. India looks stunning in Nadim Carlsen’s beautifully composed shots captured both on the widescreen and in intimate jewel-like settings. Apart from the strong central cast, Haq uses periphery characters to warn of danger, tempt and tease a girl who rapidly has to adapt from her Western lifestyle to the world of a closeted and protected unmarried woman in a highly restrictive Muslim-dominated society.

Sadly, Nisha is rather underwritten as a character – whether by intent in respect of cultural traditions or by omission – it’s never quite sure, but strangely this works to the film’s advantage and Haq makes her character come alive a way that feels both authentic and beguiling. Yer we feel for Hussain’s father figure who internally struggles with his duty as a traditional father requiring him to impose draconian measures on his daughter while he still clearly loves her – it’s a tough role but Hussain pulls it off with dignity, strangely evoking our respect and sympathy in this shocking and convincing arthouse parable that lifts the lid on a society that still adheres blindly to its traditions. MT