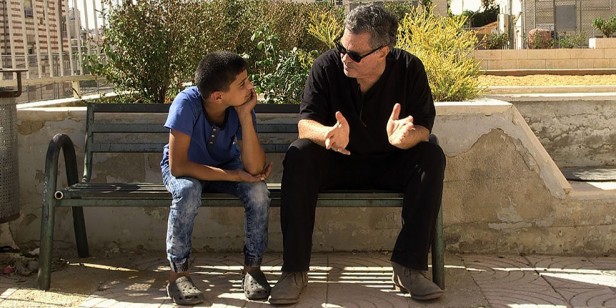 It is fair to say that the Israeli/Palestinian conflict has influenced the entire career of Israeli filmmaker Amos Gitai: in 1973, when studying architecture, he was called up for military service during the Yom Kippur war and joined the helicopter rescue crew. He filmed some of the action with an 8mm camera, and the continuing wars (on different levels) between the two nations have been at the centre of his output, culminating in Rabin, the last Day (2015).

West of the Jordan River is, in spite of its rather poetic title, a very harsh condemnation of hard liners on both sides. More or less bookended by a 1994 interview by Gitai with the incumbent Prime Minister of Israel, Yitzhak Rabin – a year before his assassination by a right-wing Israeli fanatic – the documentary shows that Rabin has never found a political heir, but that the current government of Prime Minister Benjamin Netanyahu is preparing to swamp the West Bank with Jewish settlements, making a two-state solution impossible. But one is still shocked, when Gitai interviews the current Deputy Foreign minister, Tzipi Hotovely (*1978), mother of two daughters and an ardent feminist. Far from even trying to show understanding, Hotovely launches into a war-mongering attack: “We are not occupying our own land. This is not a territorial war. This is a religious battle led by Islam, We can’t ignore this basic truth. This land is ours. All of it is ours. We are not apologising for that.” On the status of the Dome of Rock, the Al-Aksa Mosque and the Islamic Museum on the Temple Mount, she is even to the right of Netanyahu: “It is my dream to see the Israeli flag flying on the Temple Mount. I think it’s the centre of Israeli sovereignty. All of Judea and Samaria belong to the Jewish people”.

Gasping after such an affront, Jewish journalist Avi Shavit is well aware where the politics of young hardliners like Hotovely will lead to: “The Israel I love, if it does not make a dramatic U-turn in the next ten years, will vanish. The government is going to have 750 000 settlers on the West Bank in this period. Then you cannot share the country any more. It will be the end of democracy in Israel. Give the Palestinians full citizenship and end the State of Israel in its current borders or revoke the rights of Palestinians and end our democracy. The settlers have enacted the most Anti-Zionist policy, which is completely destroying us. We have to go back to the point, when was Rabin assassinated”.

When Gitai visits the “Parent’s Circle”, a group of Israeli and Muslim mothers who have lost their children in the war, the full cruelty of the armed conflict becomes obvious. A Jewish mother, whose son was killed, had left Iraq in 1942 as a child, states ”Israelis do not understand the Arab mentality. And we Jews always know what is good for others, we can’t let go and let others be different from us”. A right-wing journalist wants to forbid groups like the “Parent’s Circle”: “They join international groups, who want to destroy Israel”. Obviously he also means such groups like in Hebron, where Muslim women are learning to use video cameras to document the atrocities of the Israeli army. The instructor makes it clear that this is not a feature film shoot: “Zoom, but don’t forget your own life”. Another journalist agrees with the director “Netanyahu is not a religious fanatic. He sees the Arabs as a managing problem. He wants to secure the territories, which are important for Israel. But he is foremost an ideologist”. Interviews in Hebron show the total breakdown between the community and the occupiers. The story of the Bedouin School facing demolition is typical of the conflict. The school is ‘illegal’ according to Israeli settlers, “who seem to be above the law”. When Gitai interviews a young Arab boy on his balcony, he asks him about his dream for Hebron. The boy answers spontaneously “To die as a martyr.” Gitai tries in vain to convince him that to live is better, but the boy maintains his position.

The last word of this depressing documentary goes to the director: “Extremists on both side help each other to fight to the death. Nothing is more solid than the coalition between the two sides [Hamas and the Israeli government] who do NOT want peace”. AS