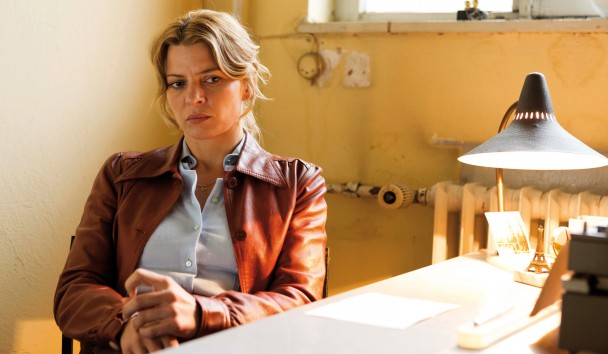 Christian Schwochow’s escape drama WEST explores the pursuit freedom. Suffused with themes of friendship, emigration and emotional trauma, this is a deeply affecting film that has much relevance still today, although it focuses on a woman’s escape from East Berlin in the late 70s.

Based on the novel Lagerfeuer (Campfire) by Julia Franck, WEST opens with a sunny romantic scene of Nelly Senff (a foxy Jördis Triebel) kissing goodbye to her lover, Wassilij (Carlo Ljubek) and father of her her nine-year-old son, Alexej (Tristan Göbel). Fast forward several years, and the tone shifts to a grim West German refugee camp, where the two soon realise that crossing the Wall does not lead to the freedom and prosperity they had expected. The Allied officials processing new arrivals in West Berlin’s Marienfelde Refugee Centre are no different from the those Nelly left behind.

Although Nelly strikes up immediate friendships with Polish inmate Krystyna (Anja Antonowicz) and the enigmatic Hans Pischke (a prickly Alexander Scheer), the ‘Westerners’ regard them with disdain and Alexej is increasingly bullied in the streets. Stripped and interrogated, Nelly is humiliated to discover that her bid to obtain her papers and find work as a professional chemist is being hampered by suspicions that Wassilij may still be alive and living as spy, and that the Stasi are watching her – a hunch on the part of CIA Agent, John Bird (Jacky Ido) – who plays on her emotional fragility and their potent sexual chemistry to probe Nelly further – in more ways than one.

Frank Lamm’s hand-held camera contrasts the bleak scenes in the camp with moments of emotional richness – seein in the torrid love scenes between Bird and Nelly and the moment where Nelly gets her working papers, where the camera offers soft-focussed visuals accompanied by Lorenz Dangel’s atmospheric score, as Nelly and Alexej frolic in the Autumn leaves.

However, the hypothetical but consistently taught conspiracy narrative remains sketchily in the background of this less intriguing immigration story. Much more play could be made of her relationship with Bird (a mesmerising Jacky Ido) and the effects this has on Nelly’s state of mind with relation to her still un-resolved emotional trauma with Wassilij. Heide Schwochow’s script is clearly seen from a woman’s perspective with her superbly fleshed-out charactisation. This a drama of of rich human dynamics: the relationship between Pishke and Alexej, who relates to him as a father; that of Nelly and Bird, on whom she projects her pent-up physical need; and the tender scenes she shares with her son, all feeling palpably authentic and appealing. As Nelly, Triebel brilliantly portrays a woman whose gradual paranoia starts to affect those closest to her, as her personality breaks down. Tristan Gobel’s turn as Alexej is remarkably nuanced and sensitive for an actor so young (11). Nelly is a woman who is desperate to move forward: from her physical prison of the past and the subjective paranoia that threatens to derail her future. Schwoschow, an GDR born director, clearly understands this and so does his cast. Although it has a message of hope, WEST explores how a deeply yearned-for freedom has just as many complications as the restrictive prison of the past. MT

OUT ON GENERAL RELEASE ON 12TH JUNE 2015 AT THE FOLLOWING CINEMAS: