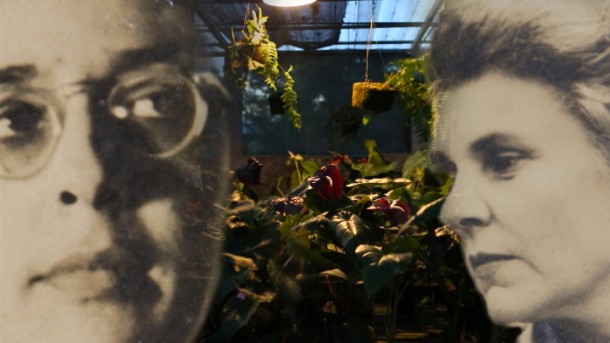 Barbara Hammer creates an expressionistic portrait of the fascinating early 20th century American poet Elizabeth Bishop, exploring her love life and her outstanding contribution to the literary life of the era (1911-79) through black and white photos, dreamlike collages and an atmospherically eerie and evocative score. Selective talking heads offer informative and enchanting impressions of their charismatic friend and collaborator who was given to peripatetic wanderings to exotic places where she could give full reign to her lesbian lifestyle during ’30s prohibition.

This is a sensuous and often mesmerizing piece of filmmaking and Ms. Hammer, no stranger to the lesbian subject matter, embellishes her largely experimental documentry with charmingly suggestive incantations often accompanying readings of Bishop’s poetry and verses, some of which are impressively avantgarde: “I’m so hot to trot; I’m so hot to trot”.

Early on in Bishop’s life, it also emerges that her mother was committed to an institution leaving her to the care of grandparents in Nova Scotia where her eccentric (for the era) love life involved affairs with women of all ages from her college tutor to her classmates.

Spending many years in Brazil, she lived a bohemian and often toxic lifestyle near Petrópolis with successful architect Lota de Macedo Soares, on her modernist estate. Here Bishop became an alcoholic and Soares eventually committed suicide with an overdose. Later, at Harvard, Bishop eventually managed to relax into her sexuality, and expressed it through suggestive clothing and louche behaviour with her friends – fellow poets Kathleen Spivack and John Ashbery – in the privacy of her home where she played ping-pong in tight leather trousers.

But the most fascinating revelations come courtesy of her Brazilian housekeeper who paints a vivid and vehement picture of one of America’s most imaginative literary doyennes. MT

SCREENING DURING BFI FLARE UNTIL 27 MARCH 2016