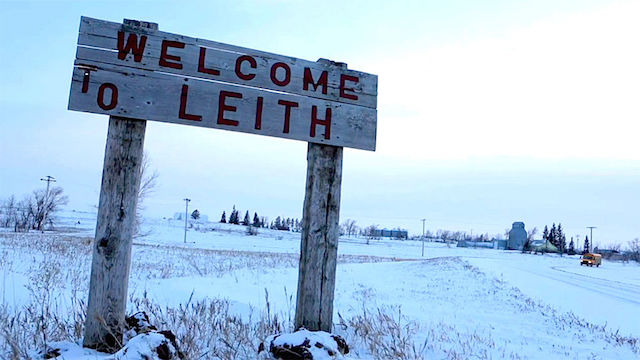 In 2012 Leith, North Dakota, had 24 inhabitants. An ex-boom town, left behind after the oil bonanza was over, only the most stubborn residents remained. To their great surprise, one man bought a property, unseen, for $5000, and promised to buy even more for his “friends”. This man was Craig Cobb (61), leading figure of the American National Socialist Movement (NSM).

Directors Michael Beach Nichols and Christopher K. Walker followed Cobb while he attempted to turn Leith into a stronghold for his movement promoting racial hatred. By buying up all the cheap property, his aim was to gain control of the town run by Ryan Schock. WELCOME TO LEITH could easily be modelled on a novel by Jim Thompson: the psychotic Cobb wandering the streets of the town armed to the teeth, his house looking like a Christmas tree adorned with Swastikas of all sorts, advertising white supremacy. It’s worth noting that North Dakota’s population is already 90% white, and it is legal in the USA to display the Swastika symbol under the First Amendment, as ruled by the Supreme Court in 1978. Cobb and his sidekick, the much younger Kynan Dutton, took to patrolling the streets armed, and started to interrupt the City Council’s meetings. They also began a hate mail campaign, their main target being Sherill Harper, married to Bobby, the only black person in the town. “What are you doing married to a negro” they asked in a threatening manner, putting up also a sign “No Niggers in Leith”. Another target was Lee Cook and his family, who moved to Leith after their daughter was sadistically murdered, the NSM brigade trying blame racial motives for the crime, and disturbing the healing process for the family. On their “Vanguard News Network” Cobb and Dutton spread vile racist propaganda on the internet, portraying their “take-over” of Leith as a defensive stand on behalf of white people. Cobb, actually on the run for hate crimes in Canada and son of a multi-millionaire, had a DNA test taken, to prove his Aryan heritage. In front of an amused TV audience, it was announced that Cobb had 14% African blood in his veins.With help of the Southern Poverty Law Centre (SPLC), who keeps trace of White Supremacy groups in the USA (and whose funds were cut after 9/11), the citizens of Leith began their fight back, and the rest is history until the present day.

WELCOME  TO LEITH has all the qualities of a feature film, co-director/DOP Nichols achieving a true real crime atmosphere, the dilapidated, ghostly Leith the scary background to a story of violence, which could have escalated, had it not been for the solidarity of the town’s citizens. Somehow it seems fitting that the violent racists of the NSM choose a place so haunted as Leith, to build an Aryan model town. Taut and atmospheric, WELCOME TO LEITH captures true evil in the backwater of the USA. AS