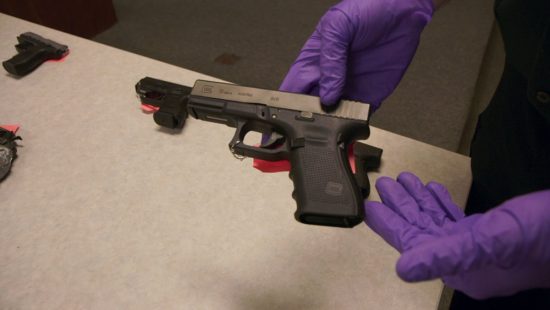 How the man who invented the world’s most popular gun ironically became the victim of contract killers and a multi million dollar fraud in a story of corruption and fetishisation.

In 1981 Austrian engineer Gaston Glock (1929) invented the handgun that bears his name and would eventually become the gun of choice for criminals, law enforcement and private citizens in the United States. What started in a small Austrian village as a struggling firearms business soon became a multi-billion dollar concern after the company rebranded from a gunmakers to manufactorers  of ‘‘law enforcement equipment’ with a weapon that never blocked.

Little is known about the reclusive cultish 89-year-old which is probably why the filmmakers decide to focus most of their film on the ‘piece’ and its pistol-packing public, rather than than Glock himself and his rise to success, via tragedy. All we know is that he’s recently become a father again with his decades younger wife. But you’ll have to wade through over an hour of perifera to get to the real meat of the movie: the story of the elusive Mr Glock himself.

Plastic except for its barrel, the topselling Glock handgun’s claim to fame is that “it never fails”. As such – along with the car-manufacturer Mercedes – it has piggy-backed onto one of the US’ most successful pop-cultural references – gangster rap. The Glock is also the weapon of choice for the average US citizen in a nation where guns are important everyday accessories, just as mobile phones are in the UK.

This tonally uneven investigation at times feels like a paean to the Black community and its sad history of violence, at others like an advertisement for the Glock firearm and its wide-ranging enthusiasts, as it weaves through well-researched episodes that start in US neighbourhoods and gradually move on to distant war zones: we meet Black rappers, little old ladies and their trainers, gun-sellers and the Police force – all rave about their Glocks. The unifying message here is a depressing one: in the US there is widespread acceptance of firearms as an everyday accessory: like a phone or even an umbrella. When one woman’s dog died, she brought a gun to keep her company.

Eventually the Austrian filmmakers delve into even darker territory to uncover a sinister trail of politics, power, and corruption which sees crooks, politicians and industrialists using the same weapon of choice to defend themselves. Weapon of Choice is both intriguing and depressing. MT